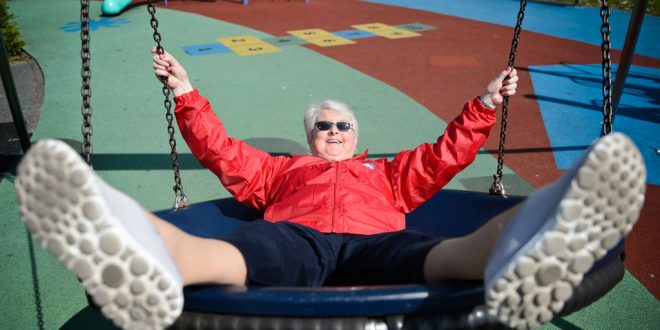 Shannon’s Kay Murphy has been elected the national president of Active Retirement Ireland, following its AGM in Carlow last week.

She has been involved in the organisation for nearly 20 years, she says.

“I first joined in 1998 with a group in Newmarket-on-Fergus called the Going Strong Club. Then I started a group here in Shannon when I moved, so I’ve been in it all the time really but never at this level.”

Kay had been vice-president of Active Retirement Ireland for the previous two years but that did not guarantee her ascension.Instead, she won an election, defeating candidates from Donegal and Wexford.

In relation to the celebrations after she came out on top, she says, “I was allowed to bring 14 [to the AGM] and we all assembled in my room and we popped a couple of corks!”

Originally from Glin in West Limerick, the mother-of-five says she wants to increase the organisation’s standing.

“My main aim is to make it bigger, to increase the membership. I want it to be seen, to enlarge the profile so it will be a force to be reckoned with. We have over 24,000 members at the moment but the stronger you are, the better chance you have of being listened to in relation to lobbying the Government for what we want for older people.”

Getting supports for older people to stay in their own home is a priority.

“At the moment, we have just done a survey. It showed that 82% of older people want to stay at home and end their days in their own house. Only 1% opted for a nursing home and the balance opted for residential care, as opposed to a nursing home. We are trying to lobby the Government. They probably won’t transfer funds from the Fair Deal to Home Care but Minister McEntee said she would probably have another fund and increase it for home care.”

She also wants to see rural services, including post offices and bus routes, preserved but says isolation is also a huge problem for the elderly in urban areas.

“Isolation is the biggest problem for older people and that applies to city, country, town and village. It’s nationwide. Whether you’re in Limerick City or Dublin or out in the country, it’s the same thing. Once you go into your house, if you live on your own you’re on your own and that’s it.”

Regarding what Active Retirement Ireland can offer, she says, “We have over 500 associations throughout the country. Some groups meet every week. Some, like us in Shannon, meet monthly but we have activities every week that people can get involved in. We have aqua-aerobics, we have bowls, we have walking and we have Go For Life exercises through Clare Sports Partnership, which is a great body. At our meetings we’d have a speaker or an adviser or it could be someone to teach us about set dancing. We have lots of things. We started social dancing last month and we had Larry McEvoy.

“Any activities at all where you can meet people, sit down and chat and be happy, that’s what Active Retirement is all about.”