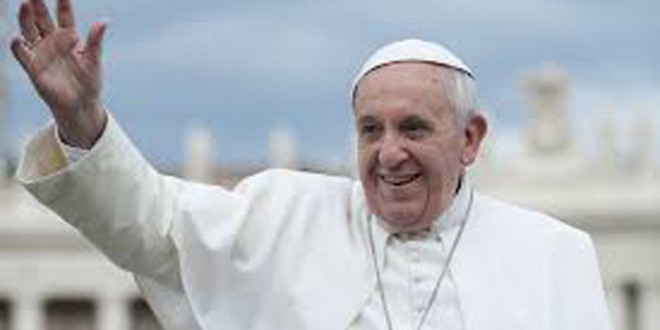 Pope Francis has South Galway in his “prayerful concern”, according to a letter from the Apolostic Nuncio to a local General Election candidate.

Last week, he received a letter from Archbishop Brown stating that he had personally assessed the “terrible flooding” in the area when he was there last month.
“I have informed Pope Francis about the flooding and I can assure you of his prayerful concern for all the people who have suffered the effects of this very distressing situation,” the letter said.

Councillor Fahy told The Clare Champion that he was very moved by the contents of the letter.

“I might as well be honest, it made me that little bit emotional to see that the Pope has recognised the conditions that people were going through. Please God, God will return to them double fold what they have suffered,” he said.

Councillor Fahy would love to see the Pope visiting Ireland and returning to Galway.
“I am a member of Galway County Council since 1979. Within three months of my election, Pope John Paul II visited Ireland and came to Ballybrit. I think he left an outstanding mark on the memories of the people of Ireland.

“The youth of Ireland were in Ballybrit that day and they are the men and women of today. They felt it at the time, when the Pope said ‘Young people of Ireland, I love you’, and that has echoed and echoed down through the years. It has been a sparkling light to those people,” he added.

As well as having a spiritual impact, Councillor Fahy believes a papal visit would also bring economic benefits.

“After the visit of Pope John Paul II, the country began to recover and the boom came shortly afterwards. I think he left a blessing on the country,” he said.

Councillor Fahy said the most recent flooding in South Galway was the worst he had seen in his time as a councillor.

“The misery and hardship of people having to leave their houses was terrible. In 35 years as a public representative, I have never seen anything like it. There were huge detours for people and even those who didn’t have to leave their houses, suffered intolerable hardship.”

Councillor Fahy explained that he met Archbishop Brown in 2013 in Knock and has been in contact with him since.

“I wrote to him and asked him to convey the misery endured by people in South Galway to His Holiness. The Pope responded that he has prayers and good wishes for the people of Galway at this time,” Councillor Fahy concluded.