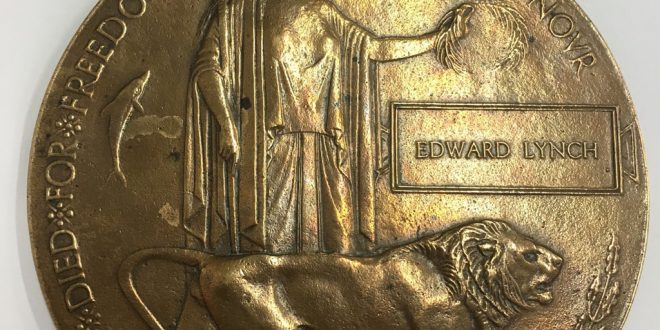 Sixth lass pupils at Parteen National School will host a special remembrance event tomorrow to mark the anniversary of Sergeant Edward Lynch and his brother Frank who both died in the Battle of La Bassée (France) during World War 1.

Edward and Frank were both serving with the Royal Munster Fusiliers when they were killed in battle on December 21, 1914, just a few days before the famous Christmas Truce. Their older brother Michael also died during the war years (December 30th 1916) whilst posted at Bere Island, Cork with the Royal Irish Regiment.

The sixth class pupils have been delving deep into Edward Lynch’s life and military career since their teacher, Cathal Crowe, purchased his death plaque on eBay several weeks ago.

The death plaque, more commonly known as the “Widow’s Penny” was presented to families who lost loved ones during the First World War. The Lynch family tragically received three Widow’s Pennies and there is a possibility that a fourth sibling may also have been killed but this is being further investigated by the class.

The remembrance event will be attended by Fr. Patrick Somers (Chaplain, Irish Army) and local parish priest, Fr. Tom Carroll. Several members of the British Royal Legion in Limerick will also be present and partake in a solemn ceremony during which their standard flag will be lowered. A bugler from the Boherbuoy Band will play ‘The Last Post’.

The remembrance ceremony will conclude with the planting of a tree in the school grounds to commemorate the occasion.