There will be no job losses in Roche’s manufacturing facility in the short term, despite
yesterday’s confirmation of its shock closure over a three-year period.

A company spokesperson has confirmed it is business as usual in Roche and stated there
will be no redundancies before June 2016.

After that time, in the event of a reduction in production of its products in its Clarecastle plant, the spokesperson explained the company would take another look at employment levels at that stage.

Managing Director, Roche Ireland Limited, Gerry Cahill acknowledged Thursday was a very difficult day
for all of its employees.

“Clarecastle has been a significant and successful manufacturing site since 1974 and the
proposal for Roche to exit the site is in no way a reflection on the performance of the
people or the site.

“We will do our utmost to support our colleagues during this transition,” he said.
Roche has informed the Minister for Jobs, Enterprise and Innovation and the IDA of the
proposal to exit Clarecastle, and the company is committed to working with the Minister
and the IDA to seek a buyer for the site.

Roche will now enter into formal consultation with employees and their representatives.
The company is committed to fully engaging with all employees and has pledged to provide all the
necessary and appropriate support.

The planned exit results from a review of Roche’s worldwide manufacturing network for
small molecules that highlighted current underutilisation as a result of the company’s
evolving portfolio.

A new generation of specialised medicines based on small molecules requires novel
manufacturing technologies and will be produced in lower volumes than traditional
medicines.
Meanwhile, SIPTU, which represents in the region of 100 workers out of the 240 in the
site, will meet with its members to discuss the serious implications of yesterday’s
announcement.

SIPTU sector organiser for the pharmaceutical sector, Alan O’Leary told the Clare
Champion that it would seek a formal meeting with management on Friday afternoon after it met its members to
listen to their concerns.

Mr O’Leary said he understood part of the reason for the closure was the fact the parent
company was looking to diversify into different product lines, which would require much
lower volumes of production.

He said the phased closure of the plant would allow the company a period of time for
discussions concerning future employment levels and efforts to sell the plant to a
prospective new buyer.

He added the final closure of the plant was envisaged at the end of 2018 and the start of
2019. Describing the announcement as “devastating”, he said the decision came as a
massive shock to employees.

Clarecastle Fine Gael Deputy, Joe Carey, met with Enterprise Minister Richard Bruton on
Thursday evening who assured him that every every effort would be made to support Roche
and its workers in finding an alternative investor.
“My thoughts are very much with the workers of Roche and their families at this difficult
and uncertain time. I know many of the workforce personally as well as their extended
families.

“The announcement by Roche that it is planning to exit the site and market it to
alternative investors has come as a shock to everyone in Clarecastle. The plant has made
such a huge contribution to Clarecastle, County Clare and the entire Mid-West Region, for
the past 40 years.

“Minister Bruton gave me an assurance that the State enterprise agencies have a strong
track record in finding alternative investors for plants in similar positions and in
particular where there is a long lead-in time. Roche has confirmed they are not planning
to exit the site for three years.

“I am committed to doing everything in my power, as well as working alongside Minister
Bruton, as well as the IDA, to secure a buyer for the site,” he added.

Clare Fianna Fáil Deputy, Timmy Dooley described the Roche announcement as a “devastating
bolt out of the blue.”

Deputy Dooley was in contact with staff at the plant on Thursday evening.

He commented: “A huge effort is needed now from the Government to work on finding an
appropriate buyer for the plant and work on saving these jobs. 240 people are employed
by Roche in Clarecastle and the loss of these jobs would have an enormous impact on the
employees themselves as well as the local community and the economy in the Midwest.

“The immediate shock for the workers will quickly turn to concern for their future
livelihoods and the Government needs to do everything it can to respond quickly and
comprehensively to this announcement.

“Sadly this announcement highlights a weakness of the regional economy. Today we had
another glossy PR driven announcement by the Government with ‘Enterprise 2025’.
“This country has serious cost issues, especially in energy, waste costs and legal costs.
“We have been highlighting this for some time and this has even been highlighted
internationally but the government is merely burying their heads in the sand instead of
tackling these issues in order to protect existing jobs and future investment
opportunities,” he added.

Clare Fianna Fáil General Election candidate, Michael McDonagh said he was “shocked and
disappointed” to hear of the plans for the closure.

“Roche has been a gold standard employer in Clare for over 40 years and employ a
great many long serving staff who are no doubt devastated this evening.”

This closure is reminiscent of the Dell closure in Limerick in 2009, its affects will be
felt not only in Clarecastle and Ennis but throughout the county,” he said
He called on Minister Bruton to react swiftly to the closure.

“If he needs to go to Zurich in the morning to meet with Roche executives let him do so,
he will have the full backing of every person in Clare to do whatever is needed to save
these jobs.

“If Roche Ireland are determined to close their facility, a new employer to take over the
plant must be found as a matter of urgency.

“This closure cannot be taken sitting down, I am sure there will be cross party support
for any proposals the Minister can come up with to either save these jobs or find
alternative employment in Clare for the 240 people directly employed in the plant,” he
said. 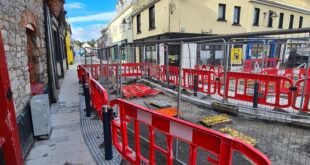