Home » Breaking News » No debate about award for volunteer Denis 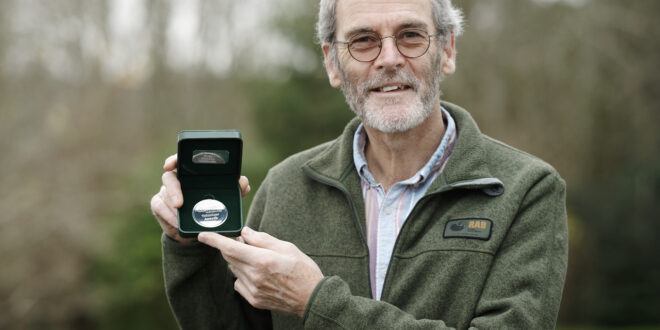 Denis Bates of Shannon who Was awarded a Concern Volunteer Service award in recognition of services to schools debating over 35 years. Photograph by John Kelly

Denis received a silver medal for his involvement with its national debating competition, Concern Debates, which he has been involved with since 1985.

Hundreds of schools take part in the nationwide contest each year with students going head-to-head in debates about world and development issues – with volunteer judges like Denis deciding who wins each one.

Denis was also a mentor for student teams at CBS Sexton Street in Limerick city when he worked there over many years. He has also adjudicated at many debating contests involving Clare schools like St. Patrick’s Comprehensive in Shannon and Coláiste Muire in Ennis.

He became involved after having returned to Ireland after spending six years in East Africa. “When I came home I still had an interest in the developing world. There wasn’t much opportunity in Ireland in those days to express that so when the Concern debates started it was something that I was really interested in. I was in school, doing debating in school anyway and this was a brilliant forum. Most importantly what the Concern debating brought was a very good forum for young second level students. There was no abuse or intolerance allowed in the debating, whereas other debates were like blood sports, there was barracking and heckling, very destructive for young people in their first or second outing. So in contrast the Concern debates were lovely.”

Of his time in Africa, Denis says, “I was principal of a secondary school in rural Kenya, up near Kericho, which is where a lot of tea is grown. It’s a lovely part of the world. It was a community school and it was under the sponsorship of the Kilteegan fathers.”

Was it hard to live in Kenya in the late 70s and early 80s? “No, it wasn’t difficult. It was different, very much so, there were quite serious challenges there to be addressed. It was really enjoyable and very fulfilling. The only reason we left was that we were married at that stage and we couldn’t have stayed on volunteer salaries which were minimal. We didn’t want to go into the colonial lifestyle, which meant going into a guarded house behind locked gates.

“There was a bit of poverty but not as much in our area, because there was the tea and the Highlands with a lot of agriculture. People were subsistent self sufficient, to Irish eyes they might seem poor but they weren’t bothered to spend their money on irrelevant things. There was plenty of poverty in other parts of the country, in the north of the country and the far west near Uganda.”

During his time there there was a threat of a Ugandan invasion, which was frightening. “That got our attention, but nothing came of it.”

In 2000 he returned to Africa, spending three months training teachers in Ethiopia.

He says that education was always highly valued in Africa, but most people had little access to it. “It was the same in all those countries, education was highly valued, but in very short supply. Things have improved in Kenya, and a bit in Ethiopia, but Ethiopia is a very troubled country, there’s yet another war going on there, in Tigray, in the north of the country.”

He loves seeing the improvement students make as they debate more and more. “I think it’s marvellous. You’ll often see students in round one and they’re raw. They all get three or four debates before the knock outs start, but even in that time you can see a process of experience and maturing and it’s wonderful to see. Once you get to the finals the standard is as high as you’ll see in any debating anywhere.”

The pandemic made for a very different experience this year. “Because of Covid there were no live debates and that meant a drop in the numbers taking part which is quite understandable, but hopefully when we return to regular practice it will pick up again.”

Denis said he was “delighted and honoured” to take the award and he was one of 32 volunteers to pick up an honour at the 2020 Concern Volunteer Awards, which were held virtually.

Concern’s Chief Executive, Dominic MacSorley, praised the organisation’s volunteers and all those who support them in their efforts.

“The extraordinary commitment of Concern volunteers has kept a flame of compassion alive in communities around Ireland,” he said.

“Their commitment has been integral in sustaining Irish people’s solidarity in action across the world’s hardest hit areas. We cannot thank them enough for their support, particularly at this most challenging time.”

Concern’s volunteer awards began in 2013 to celebrate the vital contribution made by the charity’s 1,700 volunteers in Ireland.

Many raise funds that enable the organisation to continue to alleviate poverty and hunger in the world’s poorest countries – which last year alone saw 28.6 million people reached in 24 countries.

Owen Ryan has been a journalist with the Clare Champion since 2007, having previously worked for a number of other regional titles in Limerick, Galway and Cork.
Previous PUP numbers drop as trade steps up
Next Concern over loss of Moneypoint Power Station Contract