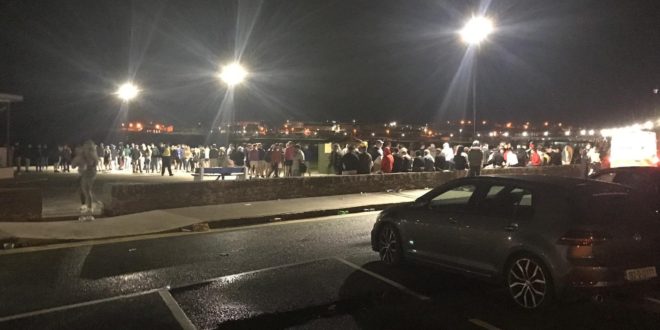 An image of Kilkee on Saturday night, taken by Councillor Cillian Murphy.

INCIDENTS at a mass gathering in Kilkee on Saturday night have resulted in nine arrests, Clare Gardaí have confirmed.
Three men are due to appear before Kilrush District Court on September 15.
Two youths have been referred to the Youth Diversion Programme.
Two men and one woman were given an adult caution and one man was released without charge.
Meanwhile Councillor Cillian Murphy, a resident of the town, reported a quieter night on Sunday. He said that, in three decades living in Kilkee, he had never witnessed anything like Saturday’s night’s events.
“I’m living in Kilkee for over 30 years and I cannot ever remember this sort of behaviour on anything like this scale before,” a post from Councillor Murphy said. He said he worked alongside council crews from 6.30am Sunday morning dealing with the consequences Saturday night.
Meanwhile, in a statement issued on Sunday, Chief Executive of Clare County Council, Pat Dowling, reminded young people that anyone can contract the virus. “Furthermore, anyone not adhering to the guidelines risks transmitting the virus to more vulnerable members of their families and communities, for whom the consequences may be dire,” he said. “There must be no repeat occurrence of the scenes shown on social media, in Kilkee or anywhere else in County Clare.”

Fiona McGarry joined The Clare Champion as a reporter after a four-year stint as producer of Morning Focus on Clare FM. Prior to that she worked for various radio, print and online titles, including Newstalk, Maximum Media and The Tuam Herald. Fiona’s media career began in her native Mayo when she joined Midwest Radio. She is the maker of a number of radio documentaries, funded by the Broadcasting Authority of Ireland (BAI). She has also availed of the Simon Cumbers Media Fund to report on development issues supported by Irish Aid in Haiti. She won a Justice Media Award for a short radio series on the work of Bedford Row Project, which supports prisoners and families in the Mid-West. Fiona also teaches on the Journalism programmes at NUI Galway. If you have a story and would like to get in touch with Fiona you can email her at fmcgarry@clarechampion.ie or telephone 065 6864146.
Previous Funds boost for five Clare areas under Town and Village scheme
Next Zimmer distributes PPE to schools