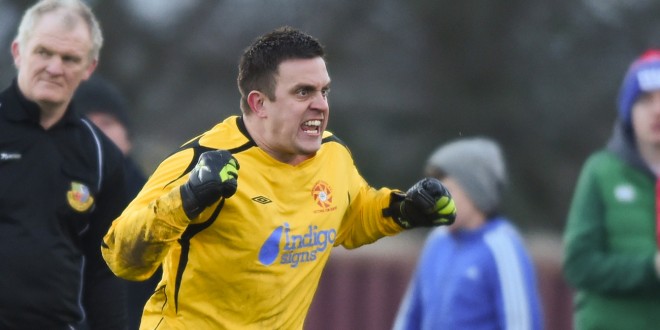 Newmarket Celtic's Niall Quinn is expected to start between the posts this weekend. Photograph by John Kelly.

A huge afternoon awaits for Newmarket Celtic as they side go in search of a place in the Munster Junior Cup semi-finals.

The game takes place in McDonough Park, with Pearse Celtic from Cork being the visitors.

It marks the beginning of a busy period for the club with a Clare Cup quarter-final and a battle to retain the Premier Division title looming in the coming weeks.

Manager Liam Murphy says everyone is looking forward to a massive few days ahead.

“It’s fantastic to have both sides competing in the quarter-finals of some of the biggest competitions around. That’s where the club want to be at this time of year so it’s a brilliant weekend ahead. We are going into it after a weekend off which allowed us some breathing space after a very competitive period where we picked up some injuries. We are slowly but surely getting lads back to full fitness ahead of Sunday. Shane Cusack is a major doubt for us though as he has a dislocated shoulder so he’s very doubtful for the game. We are lucky though because we have a very able deputy in Niall Quinn who has been involved in some big games with us over the years so there’s no fear in terms of a replacement. Everyone else should be ok though” he said.

Their opponents from Cork will make the trip from Togher on the south-side of the city on Sunday for the game, and Murphy is confident they are prepared for the challenge they will face.

He said: “We have watched them and getting that chance to see them was highly beneficial. They’re a useful outfit and I don’t think they will have any fears in terms of coming up to Newmarket. I’m sure they will be giving it everything because there is a huge amount at stake for both clubs in terms of reaching a semi-final of the Munster Junior. They will throw the kitchen sink at us so we need to be ready for that. It’s a lot easier when you are playing at home because we have had our share of away fixtures during the year and it just makes for a long day. We were down in west Cork recently and by the time we got home it was a 12 hour day. You’re trying then to make sure that lads are tuned in and ready to go so it is always a potential banana skin. This weekend now we can stick with our usual routine in for home games and hopefully we get a good crowd there”.

Newmarket are currently sitting in second place on the league table behind Avenue United, with their busy cup schedule meaning that they are playing catch up both in terms of points and fixtures. Murphy feels a win on Sunday would set them up for a positive few weeks ahead.

“We have played 24 games this year and won 23 of them and lost one. It has already been a positive year apart from the blip in the FAI Junior Cup. I think we have set about correcting that fairly quickly and getting back on the horse again. If we get over next Sunday we will be back to domestic competitions then and that will give us a chance to catch up on those games and hopefully keep the cup run going too. There’s a lot to play for and while there is a lot made about competing in the competitions outside of Clare, our bread and butter is Clare and obviously we want to try and win as much as we can wherever we can” he stated.