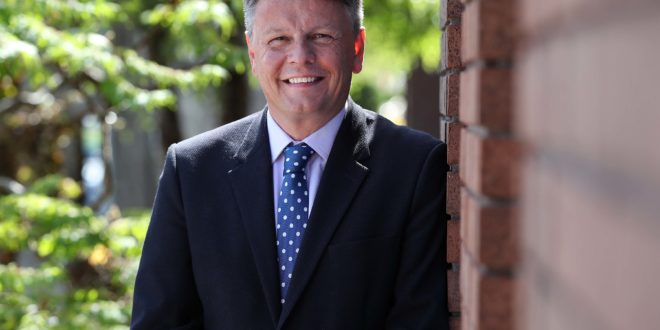 THE new Managing Director of Ennis-based Retail Excellence Ireland (REI) has issued an appeal to shop owners to come forward and avail of supports to help their businesses survive and thrive in the turbulent environment created by the pandemic.

Duncan Graham, a Nottingham native, who takes the helm from David Fitzsimons, noted that the last three to four months has seen five year’s worth of transition in the retail sector – with the most notable change being the acceleration from bricks-and-mortar to multi-platform retailing. Against that backdrop, Mr Graham sees a number of opportunities, not only in the move to online channels, but the new awareness among consumers of what smaller, local retailers can offer.

Having lived and worked in Ireland for the last 24 years, Mr Duncan has experience with some of the country’s leading retailers. “I came to Ireland with Marks and Spencers,” he explained. “I’m a retailer through and through.” Also on his impressive CV are a stint as General Manager with Brown Thomas, and another as CEO of leading ladieswear company, Libra Designs. In more recent years, he has overseen the expansion of SpecSavers.

Taking the helm at a time of huge uncertainty for REI’s 2000 members, Mr Duncan is keenly aware of the need to secure support for the retail sector. “The urgent priority for the next six months is to make sure the government is listening,” he said. “The July Stimulus is a step in the right direction, but I’m not sure that it will go far enough for enough retailers. The very welcome news is the €8m allocation to expand the Online Retail Scheme.”

The last few months have seen a 200% increase in online shopping and REI is keenly aware of the challenges and the opportunities created. “The trend is only going to continue,” according to Mr Graham. “Retailers must take a look at all of their channels now and I would urge any owner-managers who are concerned to pick up the phone and call us. We have been running a series of webinars to support people and we’re continuing to do so. Some people have found their turnover down 30 to 40% and I would urge them not to sit in silence. We can support them in accessing the supports they need and in networking to learn from others.

Christmas is coming and that will be the litmus test. It will be a matter of assessing how many retailers have closed the shutters over October and November and who is still trading.”

The radical change in the nature of the shopping experience is something that retailers and consumers are adjusting to. “People are now planning their shopping a lot more,” Mr Graham noted. “Previously, going out to buy clothes would have been an experience. That has changed and people aren’t browsing. Shopping now is more transactional. Instead, consumers are likely to research a product on-line and maybe opt from a click-and-collect service. Shopping is now a multichannel experience.”

Mr Graham and his wife Orla, a native of Tipperary town, are parents of three, and big fans of Kilkee. He sees REI’s Ennis office as the ideal base to stay in touch with the organisation’s members in Clare and across the West of Ireland. The presence of the County Clare office has already given him an opportunity to assess the retail landscape of Ennis. “There is so much good local retail going on in the town and it’s wonderful to see it,” he remarked. “At the moment, it’s really the international tourism boost that’s missing from the mix. Ennis is at its best when that’s in play. We have some top class retailers including Willow and Patrick Bourke Menswear. They are innovating and doing things we’re not seeing anywhere else.”

The silver lining of the pandemic is the new awareness among shoppers of the retailers close to home and Mr Graham is a champion of the campaign to support local.

“I think Champion Green, which is all about promoting Irish retailers is a fantastic initiative. Over the lockdown, people have gotten to know the likes of the local butcher, grocer and fishmonger and it’s so important that they keep supporting them.”

Fiona McGarry joined The Clare Champion as a reporter after a four-year stint as producer of Morning Focus on Clare FM. Prior to that she worked for various radio, print and online titles, including Newstalk, Maximum Media and The Tuam Herald. Fiona’s media career began in her native Mayo when she joined Midwest Radio. She is the maker of a number of radio documentaries, funded by the Broadcasting Authority of Ireland (BAI). She has also availed of the Simon Cumbers Media Fund to report on development issues supported by Irish Aid in Haiti. She won a Justice Media Award for a short radio series on the work of Bedford Row Project, which supports prisoners and families in the Mid-West. Fiona also teaches on the Journalism programmes at NUI Galway. If you have a story and would like to get in touch with Fiona you can email her at fmcgarry@clarechampion.ie or telephone 065 6864146.
Previous UPDATE: Swimming ban on five Clare beaches
Next Impressive Eire Óg Off To A Winning Start In Clare SFC