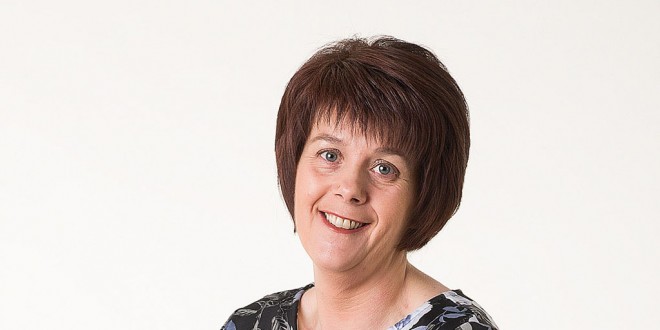 NIAMH McMahon is feeling a lot better about herself these days. Everything changed when Niamh, who is from Tulla and lives in Flagmount, hit 40.

The mother-of-three made up her mind that she had to lose weight and was determined to make it happen. Niamh rejoined WeightWatchers in Ennis in January 2014 and having attended 57 successive classes, has shed five stone.

Feeling lighter, fitter and no longer a diabetes sufferer, Niamh is now able to partake fully in day-to-day life.

“Even when I got married, I never wore a dress. Last October, was my school reunion and I wore a dress for the first time. Even my friend, Tina, who I grew up with, was shocked to see me in a dress. All the lads hadn’t seen me in years and would have all remembered me as being heavy,” Niamh recounted.

She is certain that she wouldn’t have attended that reunion had she not lost so much weight.
“I was humming and hawing about going and I enjoyed it but I wouldn’t have gone if I hadn’t lost the weight.”

Niamh attributes her renewed health and figure to WeightWatchers in Ennis.

“It’s Kathleen Shannon’s class that keeps me going every week. The atmosphere and the people in there are fantastic. I’ve made new friends since I started there. It’s all those little things that keep me going. I lost 6lbs one week and I got my 50lbs certificate. She got me to lift a bag of spuds and said ‘that’s what you’re after losing’. That was a heavy bag of spuds,” Niamh laughed.

The WeightWatchers’ mantra is to eat filling and healthy food. This appeals to Niamh, whose weight loss has directly led to her overcoming diabetes.

“From January last year, I started with what they call the Filling and Healthy 49-week list. If you want a treat, you can take it out of that. I’m not hungry any more. I could have porridge one morning or poached egg and toast another morning. That would be at 7.30am and at 10.30am or 11am I could have a bit of fruit or yogurt. Then lunch could be homemade vegetable soup, scrambled egg or porridge bread.”

Simply not eating as much and exercising regularly has helped Niamh in her quest.

“I cut down my portion sizes and cut out Taytos and chocolate. I have them now and again but I point them. I love my mother’s apple pie and I have that now and again. I weigh it and I point it. I’ve started with the lads at home as well, cutting down their portion sizes. I’m not using jars of stuff any more. It’s all homemade,” she revealed.

When Niamh started walking regularly, a few locals had to look twice. They couldn’t believe it.
“People are absolutely shocked that I’m out walking. There are people saying that I don’t need to lose any more but I’m going for my Body Mass Index (BMI). I am at my BMI now but I want to go the extra 7lbs to give myself leeway to play around with. I’m sleeping great and I’m more active. I’m running around after the kids. I’m still doing the walking, Zumba and bootcamp, although I haven’t got back into the swimming yet.”

Health-wise, Niamh is no longer diabetic. She attributes that turnaround to her weight loss. Diabetes runs in the family and her doctors couldn’t believe it when she overcame the condition.

“I was taking insulin when I was expecting. This January, I went down to the clinic after a year and now I’m a non-diabetic. I saw the diabetic nurse first. She was looking at the file and she was asking ‘are you sure you’re Niamh McMahon?’ I said ‘I am’ but she said ‘I think I’ve the wrong woman’. When I went up on the scales, she said that I had lost 33kg since the previous January. She called the doctor and he brought me in. He was shocked,” Niamh said.

Niamh was overweight when she got married and it directly impacted upon having a family.

“I was hitting 19 stone. I couldn’t get pregnant because of the weight. I went on a diet myself and lost two stone. Also, I used to hate getting undressed in front of people. You’d never see me in a swimsuit. Now, it doesn’t bother me. I just do what I have to do.”

People have noticed that Niamh looks much younger. Family and friends are also aware that offering her things like confectionery is a no-no.

“A lot of people have said that to me, that I looked a lot older when I was heavier compared to now. Even my own husband thinks the same. He’s shocked. If I go to someone’s house and they bring out cakes, they know not to offer them to me. I don’t mind them there in front of me, I know I don’t need them,” she said.

Niamh does miss the odd Chinese meal, though.

“I haven’t had a Chinese in a year and I liked Chinese. I have about seven vouchers for Chinese but it doesn’t bother me. When I go to a restaurant, I might say ‘can you put the gravy on the side, steam that or boil that’. It’s about getting into those routines,” she has discovered.

“More vegetables, more fruit and less biscuits, bars and Taytos. Plenty of meat. I cut out pancakes for Pancake Tuesday and things like that. I did gain 1lb at Christmas, which I didn’t mind. Every time I passed a bowl, I picked a sweet but once they were gone, they were gone. I had told everyone not to bring any sweets or biscuits into the house this year and they didn’t. Seán has a sweet tooth but he didn’t eat in front of me,” Niamh said of her husband.

One of Niamh’s proudest achievements happened well before she had lost five stone.

“I walked from Liscannor to Doolin and I didn’t think I’d do that. I’d only lost two and a half stone that time and my husband said ‘I can’t see you doing it’. I rang him at the end and I said, ‘I’m here’. He was shocked. It made my week and my parents were also so proud of me for doing it.

“What really keeps me going is going into WeightWatchers getting weighed. If you’re up, you’re up. You can dwell on it for a few minutes but get over it. Look back and see what you did wrong but, of course, if you’re down, it’s great,” she reflected.

“From January 2014 onwards, Niamh has attended 57 weeks straight without missing a class,” Kathleen said, adding that keeping in touch with WeightWatchers helps people to retain their weight loss.

“Through WeightWatchers we recommend that even when you reach your goal, that you come to a class at least once a month to maintain your weight. If you do that, you will maintain your weight. I’ve maintained my weight for 14 years. If I gave up being a leader tomorrow, I would attend a class for myself. I would stand that much behind it.

“WeightWatchers only employ people that lose weight with them because we’ve been through the journey, so we can feel if a member is up or down. Fourteen years ago, I lost four stone. Good luck to it,” she said.

Follow Niamh’s Weight Watchers diary, starting next week on Facebook, and see her reach her final target over the coming weeks.