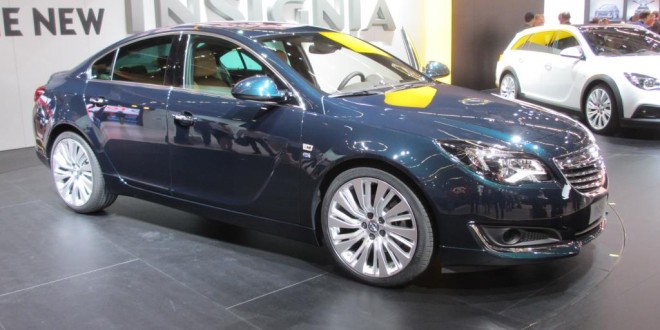 Although the star of the Opel stand at Frankfurt was their gorgeous Monza concept, back in the real world, we had the Insignia.
Although described as a new car, it really is more an extensive facelift. It’s recognisably an Insignia but in every way it has been improved – dramatically in some areas.

Inside, you’ll find a refreshed interior, with an impressive 8″ touchscreen to control various systems in the car, including audio and communications. The touchscreen is joined by a mousepad affair between the seats and I’m told that this advanced tech will be standard on all bar the base model when the car reaches Ireland before the end of the year.
Next month, we’ll have a chance to drive the car on Irish roads and experience the new 1.6 litre turbo, which delivers a very impressive 170 bhp and is said to have exceptional fuel economy. A 70 litre tank makes this an ideal choice for company drivers who virtually live in their cars.
The front of the car now features LED daytime running lights and LEDs are also employed at the rear.
Saloon, hatchback and tourer models will all be on offer.