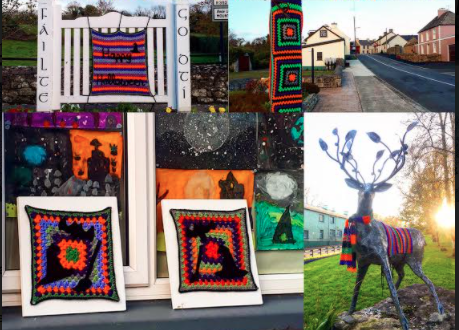 AS LOCKDOWN returns, so too has one of the most talked-about mysteries to grip East Clare this year.

After an interval of several months, a person, or persons unknown, has once strewn almost every spare inch of Main Street in Whitegate – and a bit of neighbouring Mountshannon – with colourful knitted and crocheted items. Working under cover of darkness, the mystery yarn-bomber(s), have put their considerable craft expertise to use to try to brighten the dark days of Level 5 restrictions, and lift the spirits of the locality.

Last week, in a coded message, the covert crocheter contacted The Champion to alert us to their activities. While swearing us to secrecy as to their identity, the yarn-bomber has pledged to leave their colourful handiwork in place until after Hallowe’en.

This time around, the deer statue in Mountshannon has had his iconic antlers festooned in knitwear, while in Whitegate, there are colourful crocheted items on poles, with signs outside the church and shop. There is also a special message of support for people whose home situations makes the lockdown all the more difficult.

“We have done a special hanging in support of women suffering violence in the home,” the yarn-bomber’s message said. “It has purple hearts on it which is their emblem. Lockdown is especially hard for women in this situation and we hope they will feel a little support from this hanging.”

On condition of strict anonymity, the knitter said, “We are still incognito. We have managed to go unseen putting it up and down all summer although we have had some close calls especially when dogs start barking….  so mum’s the word”.

During the first lockdown, residents were intrigued to wake up to colourful messages of hope and encouragement emblazoned in vibrant displays, some of which were in the Whitegate club colours. Among the phrases bedecking the town was ‘What’s the Craic?’, placed outside Mike Treacy’s shop and ‘Smile’, and ‘Don’t Worry, Be Happy!’ on signs at McDermott’s Post Office. Expressing disappointment at the ongoing closure of licensed premises, the yarn-bomber put the words ‘Ah Feck’ outside O’Riordan’s Half Barrel pub.

A reference to the 1980s Bon Jovi anthem, ‘Livin’ on a Prayer’, urged people to remember that, ‘We’ve got each other, and that’s a lot’.

Fiona McGarry joined The Clare Champion as a reporter after a four-year stint as producer of Morning Focus on Clare FM. Prior to that she worked for various radio, print and online titles, including Newstalk, Maximum Media and The Tuam Herald. Fiona’s media career began in her native Mayo when she joined Midwest Radio. She is the maker of a number of radio documentaries, funded by the Broadcasting Authority of Ireland (BAI). She has also availed of the Simon Cumbers Media Fund to report on development issues supported by Irish Aid in Haiti. She won a Justice Media Award for a short radio series on the work of Bedford Row Project, which supports prisoners and families in the Mid-West. Fiona also teaches on the Journalism programmes at NUI Galway. If you have a story and would like to get in touch with Fiona you can email her at fmcgarry@clarechampion.ie or telephone 065 6864146.
Previous McNamara to raise match coverage rights issue with GAA
Next Clare’s Newest World Champion Proud Of Banner Roots 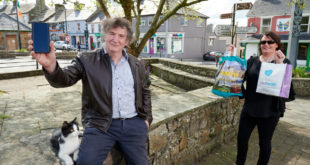