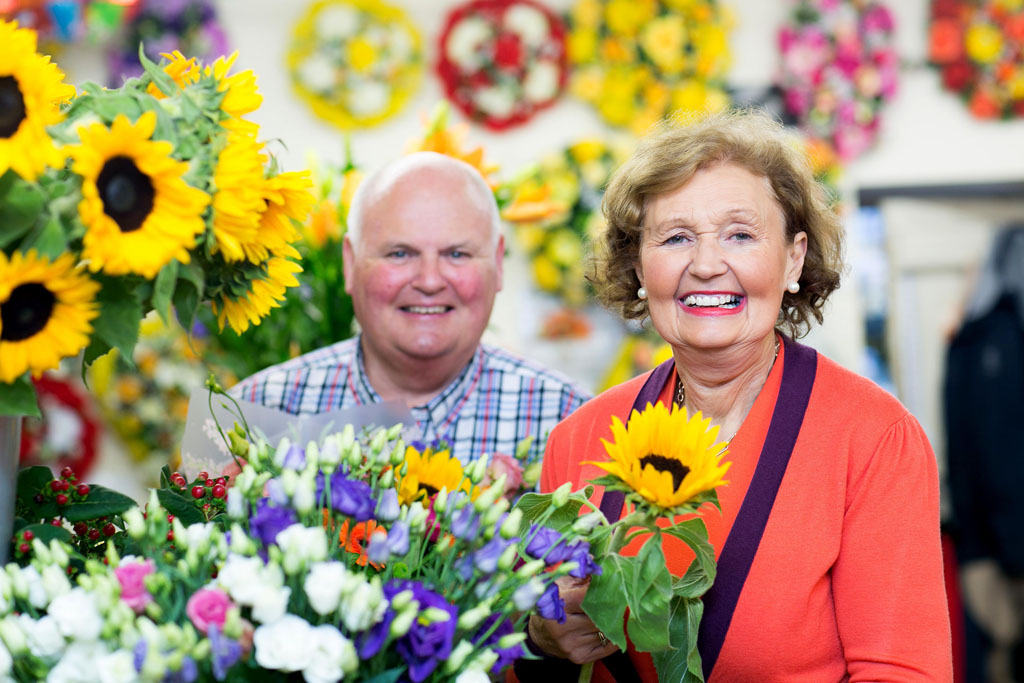 Brian and Mary Mulqueen in their shop on O’Connell Street in Ennis. Photograph Arthur Ellis.

FOR 45 years, Mulqueens Florists has been synonymous with O’Connell Street in Ennis. Now, however, the family-run outlet has closed its town centre premises and is fully operating from Carmody Street, where the
family have had a second store for 16 years.

The Mulqueen link with the town centre goes back to the early1950s, when Margo and Frank Mulqueen opened a grocery shop in Abbey Street. Yet the reason for closing their O’Connell Street shop is a contemporary one and
resonates with most people who live or work in Ennis.

“A big deciding factor was parking. That’s a major thing,” Brian Mulqueen confirmed. “People are frustrated and the local authority hasn’t provided
new parking. People quite often ordered in O’Connell Street and picked it up here in Carmody Street. Or alternatively they got their flowers delivered. We do a lot on our website. You could have people on the edge of town, who order on the website and get it delivered, rather than come into town. Every time O’Connell Street is pedestrianised, it’s the kiss of death, with the exception of Christmas. The regular customer stays away.”

That said, he feels that Ennis is a nice town to shop in, once you find somewhere to park.

“We’re sandwiched between two cities and the road network has improved so much. I think what Ennis has is the hospitality. Once you can park your car, it’s an easy town to get around. In other cities like Limerick, you’re
walking all over the place. But I think some of the selection of shops in Ennis is too small. We need some bigger stores to draw more people in,” be believes.

“We hear the younger generation saying that they have to go to other cities to get the brands and labels they want. That is driving a lot of the people out of the town,”

Brian’s wife Mary affirmed. Brian is adamant that chain stores should be encouraged to set up in the town centre if at all possible. He cites the business Dunnes Stores has brought to Ennis as an example. “Dunnes
Stores coming into O’Connell Street in the 1990s was the saving of the centre of Ennis. I was chairman of the O’Connell Street Traders at the time. All the traders were for Dunnes coming in, although the Chamber of Commerce was against it. At the oral hearing in the courthouse, the O’Connell Street Traders felt that having Dunnes close to them, they had a better chance of picking up business, than having Dunnes a mile out the road. And they were proved right. If you have a big player like Dunnes beside you, you have some chance. If they are a mile away, you haven’t
a hope in hell.

The now veteran florist still cannot understand what the council’s new market building in Ennis is all about. He is adamant that business people, who pay rates, should have been forensically consulted.

“The market development is an absolute disaster. They have killed the market. An absolute disaster. It’s absolutely ridiculous. It’s a car park, a small one and a very expensive one. It’s a great bomb shelter. If we have a
nuclear war, it’s the place to go,” he laughed.

“There isn’t enough of consultation with the businesses. Elected representative and council officials work between themselves but they don’t consult rate payers enough. They’re afraid to consult them as far as I can see. We’re the ones who are paying the piper and when they make a decision,
it affects all the businesses. The Chamber of Commerce doesn’t represent all the businesses. Far from it. The number of retail businesses that are members of Ennis Chamber is quite small. They need to consult with the rest of the rate payers. You go into the market now on a Saturday and there’s nothing. I thought originally it was to be modelled on the Milk Market in Limerick,”
he added.

“I think people were shocked when they saw what it was,” Mary commented, while Brian also has issues with other aspects of the development.

“To compound it, they realigned the footpaths. They have made a footpath that is so wide, you could put two articulated trucks on it, with the result that
it’s causing traffic jams, trying to turn to go down the market. It’s the same thing with the roundabouts in Ennis, where they have put in the cycle lanes. There are very few cyclists on them and there is only one line of traffic.”

Many years ago, when parking cars was not an issue and the town market was more of a free-for- all, the Mulqueen family went into business.

“My parents, Frank and Margo Mulqueen, opened a shop at 45 Abbey Street, which is just beside the Queen’s Hotel, in about 1952. They were in groceries at the time. They were there through the ’50s and early ’60s. Then the first supermarket opened up in Ennis. It was called the Five Star. It was in the middle of Abbey Street, across from Knox’s. The writing was on the wall for the smaller grocery store. Unless you had a big place, you weren’t
going to survive. There was a series of small shop on O’Connell Street including Meehans, Nicholas Fitzpatricks, Liptons and Knox’s. That was the grocery end of Ennis,” Brian explained.

“A lot of business was after Sunday mass and hurling games down in Cusack Park. When the Five Star opened, my mother realised that things were changing and she was looking around for something different. She hit upon
flowers and gradually switched over from groceries. That was about 1962. They worked away there but they always wanted to move up to O’Connell Street. Eventually, 32 O’Connell Street became vacant and they went
for that. That was 1972 and we worked away there for the next 45 years. We were the first florist shop in Clare and obviously the longest established since. I was reared in it and I’ve seen the big changes. One of the first customers my mother had was a farmer from West Clare looking for a funeral wreath. At that time, if you wanted a wreath for a funeral, you had to go to Limerick,” he added.

These days, florists cater for all types of events, including baptisms, weddings, funerals and February 14. “Valentine’s is 90% male customers, even still. Some guys do know what they want. Roses are still big. They still go no matter what price they cost. Discretion and confidentiality is a vital part of our business. We have very loyal customers and good staff. You need to be well able to deal with people. We get a very big repeat funeral business
but we’re in it a long time as well. Brian is there 35 years and I’m there 33 years. As a result, the same clients come back. In a way, it’s a very traditional business,” Mary reflected.

Weddings they have supplied the floral arrangements for included Andrea Corr’s and Una Healy’s. However, as Mulqueens take their leave of the town centre, they note that their extended family was once represented in
three separate stores.

“When my parents moved into O’Connell Street in 1972, Wilson’s was a pharmacy at that time and they did cameras as well. Bridget Wilson was my
mother’s sister. Further up the street, where Dunnes is now, there was Griffin’s. That was my aunt, Sheila and her husband, Liam. They switched from groceries into antiques. Our mothers were from Donegal Town. They
were three sisters. They were Dunleavy. Bridget married Louis Wilson and they came to Ennis in the late ’40s. The sisters came to Ennis on holidays and married two Clare men.

“This area would have been much more prosperous than Donegal because you had Shannon and there was a big draw there. My grandmother in Donegal used to supply linen to the duty free shop in Shannon. She
used to come down to the duty free and deal with Brendan O’Regan. Then another sister married a Fitzpatrick man from Kilmihil. He was an officer in the army,” Brian said, noting that his father came from Lower Market Street.

The family ran a bakery, while his grandmother was proprietor of a ladies’ shop. The complexion of Ennis town centre has altered remarkably, although
a number of family-owned businesses are still evident.

“Dick Wilson, my cousin, has closed up. John O’Dea is gone at the top of the street, although it is leased out now. Jack Heaslip, Ennis Cash Company, Neylon’s, Mary Kelly and Moloney’s at the top of the street are the only ones left. The street is taken up now by chain stores and phone shops, although Ennis is a beautiful town. People love the buzz of the town,”
Brian observed.

As for Carmody Street, the equation is simple; their business is easier to access.
“Accessibility here is way superior. November is an interesting month to move over here but it gets us ready for Christmas. It’s a quieter street from a pedestrian point of view but the nature of business is changing. The web,
the phone and the car are crucial. The closer people can get to
the store is the important thing,” Brian has learned.

Mulqueens florists are closing their shop in O'Connell Street, Ennis.