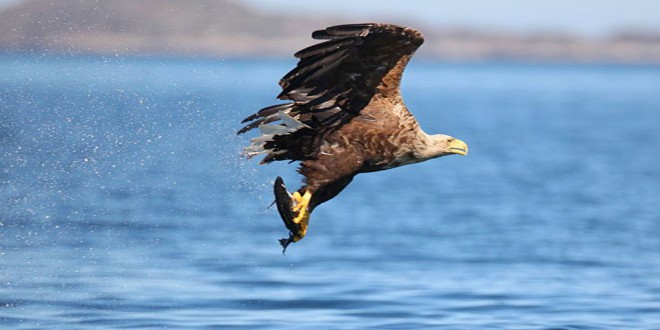 MOUNTSHANNON’s white-tailed sea eagles’ attempts at breeding this year have failed and while the cause cannot be determined, drones have been identified as a possible threat to the birds nesting.

Dr Allan Mee of the Golden Eagle Trust, which oversees the re-introduction programme for the white-tailed sea eagle, explained that the failure of the Mountshannon pair’s eggs this year is “unexpected”.

“They have been successful for the last three years, so we were surprised. We don’t know what happened for sure. There was anecdotal evidence of disturbance being a factor around the island or on the island,” he outlined.

He said there were sightings of a drone in the vicinity but said he could not say conclusively the reason for the failure of the pair’s breeding this year and any number of natural factors could have been the cause.

“All of that could be coincidental. If [drones] are in the area and then the birds fail, it is not necessarily the cause and effect – that one caused the other. The drone thing could be a worry that they are flying around the area. If they are flying around the area, the birds will generally ignore them but to me if anyone flies a drone in the neighbourhood of the nest, we just don’t know how the birds might react. They might think it is a threat; it could be something to worry about,” he warned.

He said it is difficult to find the reason for the birds’ failure to breed.

“The birds failed. People reported having seen a drone in the area in the past but it could be coincidence. We might have a jet-ski flying past on one day but that doesn’t mean that was the cause of it,” Dr Mee added.

He explained that the other factor to consider is that wild animals don’t breed successfully every year and so this failure could be due to natural causes. For instance, he said the eggs could be infertile.

He added that kayakers also pose a risk to the birds nesting, particularly if they get too close.

“That’s a little bit of a worry. Fishermen tend to land in traditional places and that tends not to be a worry for the birds but kayakers can go anywhere. It’s really a bit of an eye-opener for us but it is really more about public awareness,” he said.

While he said the trust has no solid evidence that the birds are being disturbed, he said “obviously the further away people are from the island the better”.

“During the egg stage, they are really very vulnerable and it only takes one person or group of people to land on the island. Once people are on the island, it’s a different story; the birds will move. We had a very cold spell in April but a disturbance at that time of year, even a half an hour off the egg, could be fatal. Natural causes are just as likely to be a big factor, especially when the weather was as cold as it was,” Dr Mee explained.

He reminded the public that there is a 200m buffer zone around Bushy Island to protect the birds. He highlighted that those coming onto the island with a view to capturing a photo or video of the eagles are stepping on dangerous ground.

“People don’t seem to be aware if you go towards an eagle nest and you are taking photographs, you are actually breaking the law because it’s deliberate. In most cases, disturbance is accidental but it can have the same effect of the birds deserting the nest,” he said.

Dr Mee explained that the eagles will breed again and this will not hamper their chances. He outlined that there could be up to 20 more years of breeding from the pair yet.

The Mountshannon white-tailed sea eagles have bred successfully for the previous three years, resulting in four chicks. One of those was shot, but as far as the Golden Eagle Trust is aware, the other chicks have survived.

Last year’s chick, Cealtra, was tagged and Dr Mee said she is in Donegal currently, having flown as far as Rathlin Island off the coast of County Antrim.

“Happily, she hasn’t deserted us for Scotland; she’s come back. Cealtra came back to Lough Derg and she spent a few weeks in the lake area. She stayed on the Tipperary side and didn’t cross to Mountshannon though,” he added.

Dr Mee has just returned from a trip to Mull in Scotland, where he and a delegation from Clare County Council and local eagle groups went to view a similar project that has been hugely successful for tourism for the island.

He said the success the Scottish island has had with its white-tailed sea eagles could be replicated in Mountshannon in 10 to 20 years time.

“It was impressive to see what’s being done out there without spending much money on facilities. The amount of people going to the island on wildlife holidays is amazing and they have two public white-tailed sea eagle sites there,” he said.

Next year, he said the Golden Eagle Trust’s priority will be to try to employ someone on a seasonal basis in Mountshannon. He said Mull rely on a community trust, who run the operation with the Royal Society for the Protection of Birds.

“They employ seasonal rangers and they have volunteers there. With volunteers you get volunteer drain and you really need someone who is employed, who is enthusiastic and trained to do the job and that’s something that Mountshannon needs,” he said.

He explained that one of Mull’s eagles is 29-years-old, which only highlighted how young the Mountshannon pair are.

“They’ve already reared four chicks. They will most likely be successful most years but every now and then things happen,” he concluded.