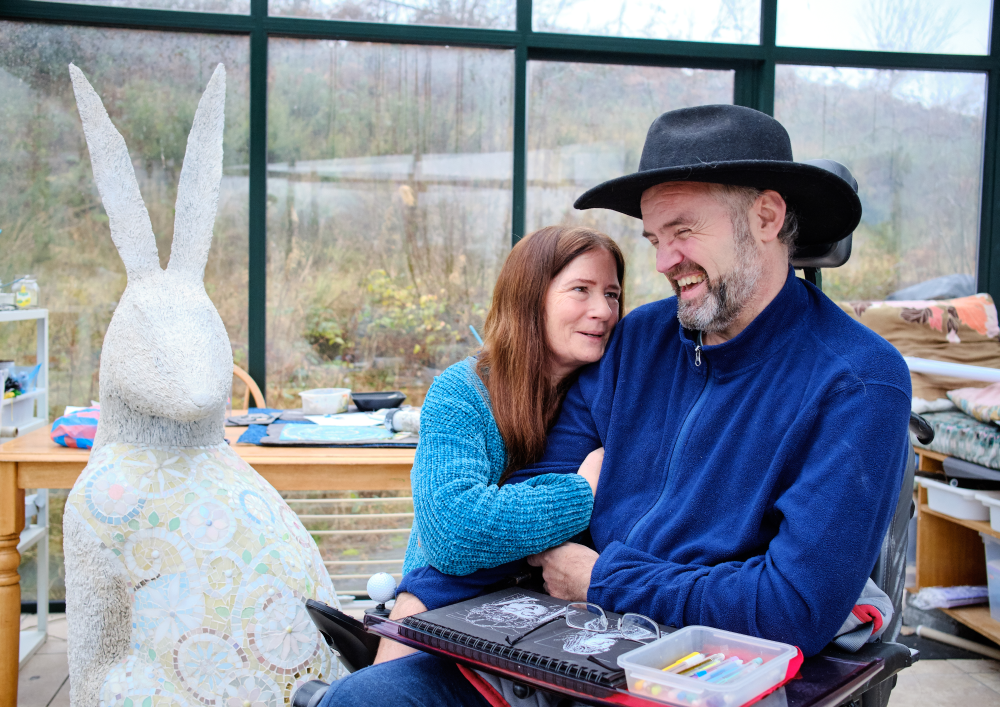 Sam Gaines and his partner, Sadhbh O’Neill, have experienced first-hand how creativity has healed and given purpose to their lives, following a life-changing diagnosis.

TWENTY years ago life changed for East Clare based couple Sam Gaines and Sadhbh O’Neill, when Sam was diagnosed with MS.

Both working artists, Sam and Sadhbh have journeyed along a tough road adapting to their changing circumstances. They had no idea what MS was or how it would effect Sam but they never let the illness define Sam or stop them from doing anything.

“MS is very personal and effects everyone in different ways. Two years ago Sam’s health plummeted and everything changed again. MS now stopped us in our tracks. Never in our wildest dreams did we think we would end up where we are today. We had plans and dreams for our future, this wasn’t one of them. We have absolutely no idea what tomorrow will bring or how Sam will be. It is a daily lesson about living in the present. MS has been a merciless teacher,” Sadhbh said.

The journey has led them to explore every type of healing from traditional medicine and high-tech drugs to, alternative and complementary medicine, energy healing, spiritual healing and everything in-between.

“It has been an endless search to fix, to heal and cure. It has been both a gruelling and a wonderful journey that has showed us a world we never imagined and brought us in contact with extraordinary ordinary people,” Sadhbh outlined.

Two years ago, however, they stopped the search for cures and for the first time turned towards the possibility of Sam not getting better and ultimately his death.

“He became very isolated. He was unable to contact people and people stopped contacting him and life just became very difficult, and difficult on me,” she said.

A very simple piece of modern technology however, would reignite his artistic passion.

“We set up a Watsapp chat for Sam, so people could know what was happening with him and they could also respond to him, and that has been a life saver. I did it as a diary where he would talk to me and I would write up the posts,” Sadhbh explained.

Sam had stopped painting, but through this chat he began to start drawing again. He lost lost his ability to paint as he did before but found he could still draw.

The first drawings were like scribbles and he then honed a technique to allow him be more creative. Working with mainly white gel pens on black paper, Sam has been able to create A5 size pieces, which are extremely detailed and beautiful.

Sadhbh said since he has discovered this new medium, Sam has found a real sense of purpose, and it has put meaning back into his life.

“When he is creating, when he is drawing he is totally present and everything else doesn’t matter and I think it has been an absolute saving,” she said.

Although physically Sam faces challenges, and these challenges continue given the nature of this progressive disease.

However the work has meant Sam is living life to the fullest. It was no surprise then that the material Sam has created would lead to an exhibition, and together with Sadhbh’s sculptures they showcased
“There is Only Love”. This exhibition was originally created as part of National Palliative Care Week for Milford Care Centre in Limerick.

However since then it has gone on display in Scariff Library’s gallery space, where the exhibition has been extended until January 12.

This exhibition is a visual and written journal of their lives over the past year. Sam has 100 drawings exhibiting in the gallery space, each one is A5 in size.

“He is just so skilled, it’s extraordinary, and I know I am biased. He uses gel pens, he usually uses a white gel pen on black paper, and the gel pen runs very smoothly so it needs very little effort from his part to make it, so that’s what he uses and it works really well. He only draws in bed now because he doesn’t have the energy to sit up from his wheelchair and draw. He will draw in the middle of the night or early in the morning, when things are very quiet. The rest of the time of the day he doesn’t really have the energy,” Sadhbh outlined.

Since the exhibition has been on display she said the response has been positive in that people are really moved by it because it is so intimate. “You see the drawings, which are incredibly beautiful, but when you realise the effort it takes him to draw and what he writes, it’s an incredibly moving exhibition”.
Sadhbh added that although 100 of Sam’s drawings are on display in the exhibition, he has completed 500 to 600, over the past year and a half.

“If the exhibition travels again, I’d like to get a looped film going, because when you see how he draws and how slow it is, then you can really appreciate the effort it takes and what it is to complete one of these drawings,” she said.

Life has been tough for Sadhbh too, who is also Sam’s carer, but she said while caring for Sam is a 24/7 job, her work as a sculptor keeps her together.

For both of them, she said art is a driving force, and she is so fortunate to have that ability in her life.
She said this exhibition has opened up a conversation about those living with a chronic illness, of slowly dying, and all the issues that brings up. 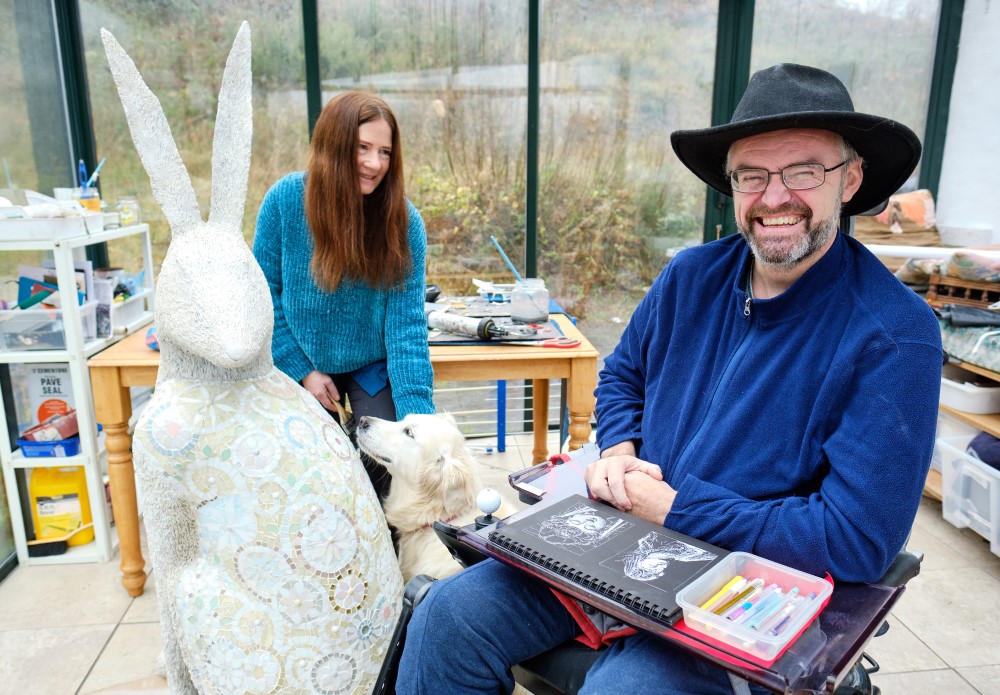 “We live in a death phobic society and we have no language for what is happening to us. Illness and death are not failure. It is hard for others to understand that by embracing death we are in fact embracing life. Creativity is now our language, because it transcends and speaks of the human spirit”.
Sadhbh said they don’t want to miss a moment of this precious time. She is bearing witness to Sam’s life so she can be his memory for the times he forgets.

“We are no longer running. Our home is our sanctuary now, it feels like a second skin. An extra layer of protection in these challenging times. It’s like a peaceful, still, healing and beautiful blanket that we wrap around ourselves and a good place to rest. There is nowhere else I want to be. This is the most intimate of adventures,” she said.

The exhibition has been really important to Sadhbh and Sam, because they have always been working artists, but they have found themselves unable to work in recently times.

“This exhibition is huge because it means we are working. We’re not selling the work, because at the moment it is so precious but we are exhibiting and that is our life. It’s a chance for both of us to work together again. It gives us a sense that we are working again and that is the thing that sustains us,” she explained.

This exhibition, which also features some of Sadhbh’s large colourful mosaic covered sculptures, is a visual and written journal of their lives over the past year.

It is a story about shinning in the face of adversity and living life to the fullest, while at the same time being present and authentic to all the challenges that serious illness and full time caring brings with it.
“At the end of the day, this exhibition is a love story, because when everything has been stripped away from you, when everything that you thought defined you as a person is gone, all that is left, is love,” Sadhbh concluded.

Carol Byrne is a reporter at The Clare Champion newspaper reporting on news in the East Clare area and the arts. She also covers the courts in County Clare and has received seven national awards for this coverage from the Law Society of Ireland and a National Lottery Local Ireland national media award for Best Community Story 2019. A Masters in Journalism graduate of NUI Galway, she also holds a Bachelor of Arts from the University of Limerick in Music and Media Studies, and a Higher Diploma in Irish Legal Studies. She began her career interning at The Limerick Leader and Clare FM, before taking up a full time post at The Clare Champion in 2006.
@@Carlsburn
Previous ‘Decent sobriety just changes your life completely’
Next Scariff ‘Abandoned’ after council dig up street

INTERNATIONAL tributes have been paid following the passing of the acclaimed Bellharbour concerntina player, Chris …