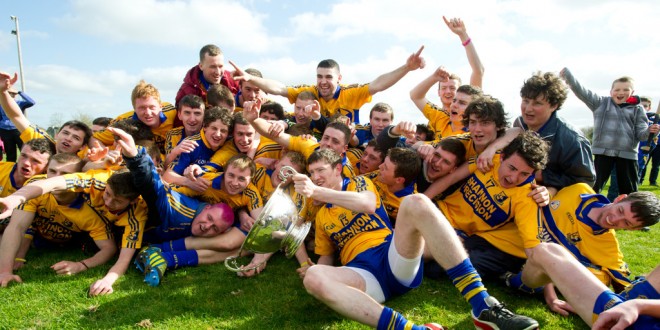 Sixmilebridge players celebrate together with the cup following the win over Ballyea in the U-21 championship final at Clarecastle. Photograph by John Kelly

In retaining the Clare under 21 A hurling championship title at Clarecastle on Sunday, Sixmilebridge were crowned champions for the fourth time in six years and for the fifteenth time in the history of a competition introduced back in 1964.

They went into Sunday’s final as underdogs but as the game progressed they took a grip on matters and a strong finish which sat them score 1-5 without reply in the final twelve minutes sealed this latest success.

The outcome was in doubt for much of this tie when the sides were level on five occasions up to the 50th minute.

A tally of nineteen wides is sure to be a big talking point in Ballyea who certainly had the chances to have had a much greater tally on the scoreboard.. They dominated the opening quarter but only found themselves with a two point advantage, 0-4 to 0-2, at this stage.

Five minutes from half time it was 0-6 to 0-3 for Ballyea but the ‘Bridge finished the half strongly, scoring 0-4 while conceeding just one to leave the sides level at 0-7 each at the mid point.

Twenty minutes into the game, the champions lost goalkeeper Patrick Freeman whose replacement, Clare minor goalie Jason Loughnane quickly showed why he is so highly rated with a powerful save.

The teams exchanged points twice in the opening ten minutes of the second half before Tony Kelly put Ballyea two clear with eighteen minutes still to play.

Ballyea didn’t score again but it was another eight minutes before the holders got back on terms. From here to the finish they had the upperhand and Barry Coote in the Ballyea goal was called on to deny Alan Mulready with eight minutes remaining. He could do nothing to prevent Mulready getting the game’s only goal in the final minute of normal time, a score which sealed victory for the champions.

The availability of Jamie Shanahan, who has missed much of the season due to injury, was a huge boost to the winners and the Clare panellist was his side’s top scorer with 0-6 to his credit. Brian Carey, Barry Fitzpatrick, Conor Deasy, Alex Morey and Alan Mulready in the closing quarter, were prominent for the winners.

Jack Browne, Gearoid O’Connell, Joe Neylon, Martin O’Leary and Tony Kelly did best for Ballyea on a day when Niall Deasy struggled after suffering a hamstring injury in the opening half.