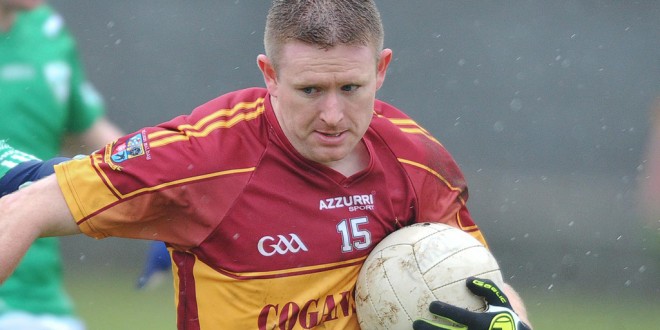 Eoin Curtin was deployed as an extra defender for Miltown in their Munster intermediate semi-final. Photograph by John Kelly

Playing in front of a crowd of 1,050 people in Miltown, the home club started superbly and led 0-6 to 0-0 after 23 minutes. While the Kerry intermediate champions kicked six wides in the opening half, they could not match Miltown’s fluency, support play and all-round work rate for all but the last seven minutes of the half.

Deploying Eoin Curtin as an extra defender worked exceptionally well for Miltown. Curtin’s reading of the game in the opening half was flawless. He cut out several Currow through balls and afforded his full-back line reliable protection, while Curtin’s distribution and support play was also very impressive on a difficult day for football, considering the weekend rainfall and tricky breeze.

Down field, Eoin Cleary showed his class in the third minute when he fired the game’s opening point in a move started by Eoin Curtin. While Currow were not without chances themselves, Miltown’s finishing was at a higher level. Darragh McDonagh (twice), Seánie Malone, Conor Cleary and Eoin Cleary (free) tagged on an array of well-finished, crucial points.

Currow needed somebody to take the initiative and corner-forward Mike McCarthy did exactly that, putting over three points in the closing seven minutes, two from play. However, they were dealt a huge blow just before half-time when Currow midfielder Paudie Collins was shown a second yellow card, followed by a red. It was not obvious what foul had been committed.

The visitors were out first after half-time and started with renewed vigour. Points from Johnny Buckley (free) and a lovely Dan O’Shea score left Miltown just a point ahead, 0-6 to 0-5. It could have been much more serious for the home club if Buckley’s rocket had not rebounded back into play, having hit the inside of Niall Quinn’s post.

Having conceded five unanswered points the winners badly needed Kevin Keavey’s point, 10 minutes into the second half. Keavey judged the swirling breeze to perfection and angled over a priceless point. Four minutes later, Eoin Cleary backed himself against Timmy O’Leary and raced past the Currow defender, along the end line, before placing the ball into the path of the inrushing Gordon Kelly. All the Miltown centre-back had to do was deflect the ball over the line for the game’s decisive score. Seconds later, substitute Micheál Malone banged over his side’s final point, leaving Miltown 1-8 to 0-5 ahead, 13 minutes from full-time.

The game looked up for Currow, even as Mike McCarthy pointed a close-range free. However, they were brought right back into the game when a long-range Dan O’Shea kick was spilled by an otherwise sound Miltown goalkeeper, Niall Quinn.

The ball didn’t actually hit the ground or the net but when it bounced from Quinn’s chest, it went in behind him and over the line. Suddenly, Miltown were protecting a mere two-point lead with eight minutes left. They were clearly the better team but had they the nerve to hold on?

A soft free, awarded for an apparent foul on Seamus Brosnan, was converted by Johnny Buckley four minutes from time. Had Currow managed an equaliser, it would have been a huge setback for Miltown.

The winners retained their composure though and indeed Conor Cleary could have goaled two minutes from time but his effort was beaten away by Shane O’Leary. Currow’s Johnny Buckley, who didn’t score from play, had a reasonable point-scoring chance waved wide a minute earlier.

Seconds from time, Currow corner-back Ian Somers was so certain he had earned a second yellow that he sprinted angrily to the sideline and hurled his gloves through the fence. He was more surprised than anybody in Miltown when referee Keith O’Brien opted not to produce a second yellow for the Currow man.

Miltown were worthy winners, having played enterprising, controlled football, mixing fitness-based support play with good football and exceptional work rate. This was best exemplified when a Currow defender had possession. In most cases, he was put under enormous pressure when trying to emerge with possession, although Miltown played just five forwards.

Apart from the aberration that lead to Currow’s goal, Niall Quinn did well in goals, while the seven Miltown defenders were excellent, led by Eoin Curtin, Shane Curtin and Enda Malone.

Eoin Cleary and Seánie Malone were honest and selfless in attack, with both kicking valuable points and Cleary creating the match-winning goal.

This group of players have been transformed beyond recognition under the management of David O’Brien. They were relegated from senior last year and only just avoided the same fate in 2011.

Miltown will now play either Clyda Rovers (Cork) or Ballyporeen (Tipperary) in the Munster final on November 24.

West Clare native Peter O'Connell has worked for The Clare Champion for 12 years and covers everything from sport, especially GAA, news, features and has been even known to branch into the fashion scene on occasion.
@@westclarepage
Previous Call for cannabis possession to be included in adult caution scheme
Next Cleary cleans up as Miltown prepare for final showdown