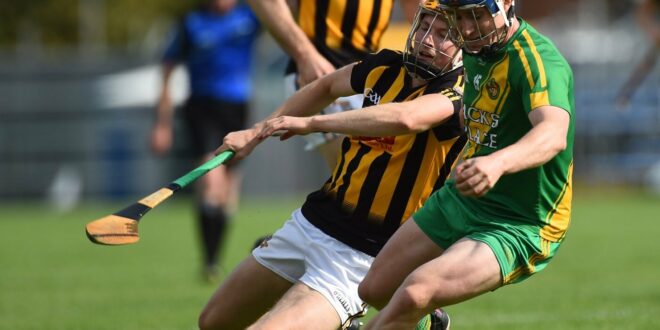 2018 champions Ballyea led by the minimum with the game in injury time and looked to have warded off a late charge from the Mills, but Crehan’s late goal and an inspirational point from 2013 All-Ireland winning captain Pat Donnellan saw them over the line.

It was a cruel twist on Ballyea who had rallied from a slow start to lead by 1-15 to 1-11 at the final water break with Tony Kelly’s goal looking as if it had put them in the driving seat. Kelly (1-8) and Deasy (0-7) accounted for the lion’s share of Ballyea’s scores and the absence of the injured Gary Brennan in stemming the late Mills tide was telling.

It is a remarkable turnaround in fortunes for the Mills, who narrowly avoided relegation last year after contesting the final playoff against Tulla. Their spirit and work-rate were two major factors in this win, with that never say die attitude eventually wearing Ballyea down.

They had the dream start to the game with Conor Henry producing a deft flick to the net over the onrushing Oisín Hennessy. It came just moments after Gary Cooney sliced through the defence but his shot was rushed and cleared. It helped the Mills to lead 1-3 to 0-4 at the opening water break.

The lead was extended early in the second quarter when Crehan pointed his second score, but by the time the Mills got on the board again, Ballyea had reeled off six without reply as Tony Kelly took the game on. Three in a row from the Ballyea captain along with points for Deasy (2) and Cillian Brennan saw Kevin Sheehan’s charges move 0-10 to 1-4 clear and looked in control.

There was a sign of things to come as the Mills kept plugging at the scoreboard and frees from Crehan (2) and Jacob Loughnane saw the sides level at the half-time break.

The third quarter looked as if it would be telling with the sides level on three occasions before Kelly’s brilliant individual goal gave Ballyea breathing space. Deasy and Kelly added further points, and it could have been worse for the Mills only for an outstanding save by Killian Nugent to deny Kelly another green flag. At the turn of the final quarter, it was Ballyea in front by four points.

O’Callaghan’s Mills continued to apply pressure on the Ballyea defence in the closing stages and it yielded scoring opportunities for Loughnane to slot. Deasy and Kelly responded to leave Ballyea three in front with time running out, but a storming finish saw the Fireballs pounced for an unanswered 1-4 to stun the 2016 Munster champions.

Loughnane landed a brace of frees to leave just one between them, but the big score arrived when pressure on Oisín Hennessey resulted in a turnover close to goals which was punished by Crehan as he fired home. The win was capped off in fitting style when Pat Donnellan lashed over to seal their spot in a first decider for 27 years.