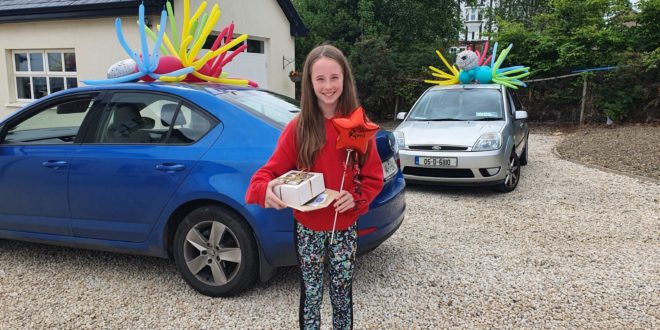 Avril Gore, who was one of the Meelick National School students who enjoyed a novel graduation ceremony recently.

DEPARTING Sixth Class students from Scoil Mhuire in Meelick are unlikely to forget their participation in a novel graduation ceremony recently.

Teachers, staff and parents of students at Meelick National School created a farewell with a difference for their Sixth Class students who were unable to gather together due to Covid-19 restrictions.

A colourful motor cavalcade drove the length and breadth of the parish and beyond to deliver personalised certificates and gifts to each of the students.

The cars, adorned with colourful balloons and horns beeping, noisily made their way through the village so everyone knew they were coming.

Individual drops were made to all 22 students who would normally have celebrated their graduation with a mass followed by a presentation of certificates and an evening of bowling.

Instead, students were made feel really special with the unusual delivery and later that evening they joined a zoom call to hear from principal, Ms Maria O’Looney and their teacher Mr Denis O’Donnell, watch a slideshow of their time in the school and to take part in some fun games.

Starting off at the school, the cavalcade went to the four corners of the parish driving towards Ballycar across to Kylevoher and Ballycannon Heights and Shannovale near the Country Club. Orla Ryan contributed balloons for the colourful roof display on cars.

Edwina Gore, who lives in Woodcock Hill, Meelick, recalled the teachers and some of the staff in the school contacted parents to seek support for this innovative initiative. Her daughter, Avril was one of the graduating students.

Ms Gore, who helped out with technology for the Zoom call to students later that evening, said a lot of people contributed in different ways to make this a very special day.

“It was a surprise for some of the children who only found out the day before that someone would be calling to them even though it was all signed off by the parents beforehand.

“It was a nice way to make a fuss out of the children and make them feel special. It made the Zoom call later that evening much easier. Some children find it hard to interact on Zoom.

“It provided a topic for conversation the whole parish as most people would have seen or heard about it.

“It was a graduation with a difference and one they are not likely to forget for a very long
time,” she said.