Margaret marks a century in Rhinevilla

MARGARET Boland is very proud of the fact that although she will hit the 100-year mark on Friday, her hair remains untainted by even a fleck of grey.

Making this yet more noteworthy is her revelation that her head of black, curly hair has never benefited from a drop of dye.

Her house is not merely Margaret’s current home. She was born there on August 28, 1909, the youngest of four O’Dwyer siblings, two girls and two boys.

Not alone did Margaret not bother with visits to the hairdresser, she never had much need to visit a doctor either. Not a single tablet, she says, has ever passed her lips.

“I had great health. The doctor made no money on me. I never took a tablet in my life,” she confirmed.

Margaret is the mother of six daughters; Mary, Bridget (RIP), Ann, Margaret, Eileen and Kathleen, while her husband, Thomas passed away 36 years ago.

She has 10 grandchildren and thus far, 14 great-grand children.

To this day, Margaret can grasp an accordion with a knowing hand and an attentive ear. Time has moved but her love of music remains steadfast.

“I love music. I’ve played the accordion all my life,” she said.

Years ago, Margaret remembers travelling to Canada, which she didn’t take to and later to New York, a city to her liking.

“I travelled on my own. Sixty-six I was. Ah, I was young then you know,” she laughed again.

“You never feel the years going just the same. Don’t the years fly?” she marvelled, casting her mind over the century she has lived through.

Five years ago, a photograph of Margaret, aged just 95, appeared in The Clare Champion.

“A nice picture wasn’t it? For that age you know,” she maintained, pointing towards the newspaper. The Boland family will mark Margaret’s birthday this weekend in Carrigaholt. She’s expecting a letter from President Mary McAleese any day now, along with a bit of a financial bonus.

“I’ve the big cheque to get now,” she said, perhaps looking forward to the Ђ2,540 boost from President McAleese, as much as the birthday card itself.

Barring, of course, the possibility that An Bуrd Snip Nua might hear of this before Friday!

Previous Dancing her way around the world
Next The youngest to meet The Greatest? 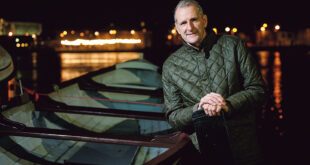 PARTEEN native, Larry De Cleir is a man of many parts. A psychotherapist, who spent …