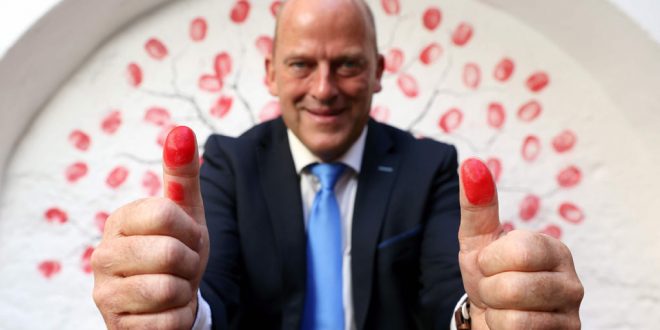 CLARE’S two-time All-Ireland-winning hurling manager, Ger Loughnane launched the Make Blood Cancer Visible initiative this week and spoke about how he suffered acute myeloid leukaemia for a number of months before it was diagnosed.

Blood cancers can be extremely difficult to recognise, the Feakle man said.

“The problem with it is there are no physical symptoms really, as regards lumps or swelling, or even pain; there’s no pain involved. That’s why the blood cancers are known as the silent killers. The only sign is constant fatigue; fatigue lasting over a long period of time and flu-like symptoms.

“That’s what makes it so dangerous. You’re inclined to ignore it and say it’ll go away, that your energy will come back. While all this is happening, your system is getting weaker and weaker. By the time you are diagnosed, your system is very, very weak and that makes the treatment all the more difficult, if your system is that low. That’s where the big danger is with any blood cancer.”

His own illness, which he received treatment for over several months in 2011, would have been more easily dealt with if he had been given a simple blood test at an early stage.

“It was a problem I had, that it did take so long. I was going to a doctor who I didn’t know that well but he kind of knew of me. He’d say ‘you’re as fit as could be’ kind of thing. The flu-like symptoms, he thought that was sinus. He was ignoring the fatigue part of it. He thought it might be blood pressure or some other thing like that. He never thought of doing the blood test and it was three months after I went to him first that leukaemia was diagnosed.
It was three months wasted really. I could have been getting treatment when my system was a lot stronger than it was when I was diagnosed.”

It wasn’t until he was literally too tired to untie his shoe laces that he realised something significant had to be faced.

“For three months I had no energy. I’d be out hunting and I couldn’t even walk up the slightest of hills. The limit came for me in June of that year when I came home from school one day and I bent down to untie my laces and I woke up two hours later. I knew then that something was really, really wrong. I knew then it wasn’t sinus for sure. I got onto another doctor, who got me onto another doctor and they did the blood test and that went into Limerick. It usually takes a few days to get a result but that evening they rang the doctor and said ‘this man shouldn’t be walking around’ because I was so vulnerable to infection, which is the big killer when you have leukaemia. It’s the infection that actually does the real damage.”

Ideally, he would have begun treatment at a much earlier stage but when he did start it, he was very impressed with the efficiency and professionalism shown.

“Once you get into the system at all, it’s just brilliant. It’s treated with the utmost priority and everything was done so quickly after that. It had gone a bit far in my case.”

While the treatment was very severe, five years later he is in good health and if people are diagnosed at an early stage, the outlook for those with blood cancers is usually quite good.

“The treatment is very, very difficult; there is no doubt about that. It is very difficult but it is doable. The great thing about it is that the expertise about those blood cancers is improving all the time.

“You’re in isolation. There’s a lot of sickness, muscle wastage, all that kind of stuff because there is such an overload of chemotherapy. It is severe but the success rate is improving all the time. The survival rate is very, very high.”
He was pleased to support the new campaign and he feels his own reluctance to seek medical help and the delays around getting treatment do reflect common problems.

“I typify firstly the person who is very reluctant to go to a doctor and I typify the lack of awareness there is about it; going that three months extra when I could have started the treatment three months before.”

While people may be reluctant to go to the doctor due to a fear of getting bad news, Loughnane said when he was diagnosed, there was a certain sense of anxiety lifting.

“When you go to the doctor and it is found out, it is almost a relief that there is something wrong. It’s just breaking through that barrier, going to the doctor and asking for that blood test. That’s the biggest barrier to overcome.”

Famously, his son heard in Australia that he had died, a rumour that spread like wildfire on a summer’s night in 2011. The story actually appeared on the website of a respected national paper, adding apparent legitimacy to the baseless rumour.

“The circumstances were comical in one way. You are in isolation for about 35 days, you get the chemotherapy and it is like a nuclear attack. All cells, good and bad, are killed and you wait for your system to regenerate itself. Then when your system has regenerated itself, you get a few days off before you go back to do the same thing all over again. I had just gone through that first phase and I had got a very bad infection during it. I was pretty bad the first time but then I was okay and I was out.

“Now the rumour was that I had been very sick, which I was for a while. I had gone out and someone rang and asked could they speak to Ger Loughnane. The nurse said, ‘I’m very, very sorry but he’s gone’. Gone was taken as dead. Next thing it was on The Examiner webpage and it all took off from there. Once it was on The Examiner, everyone picked it up from there. I suppose they should have checked it out a bit more but you know yourself how competitive it can be to be first with the news.”

Half a decade on from what was an extremely serious illness, he said it rarely crosses his mind and it didn’t change him very much.

“It’s like everything else, once you get out of it and get better again, you forget about it. You go back to your old ways again. I just wanted to get back to doing what I was doing before.

“There was no big bucket list for me to do. I was very happy with what I was doing and I just wanted to get back to that again. Once I got back to that, really the whole thing was put to the back of my mind. It’s only when I’m doing something for the Cancer Society or something that I’d even talk about it again.

“Your mind has a great way of putting things to one side and getting on with it,” he concluded.