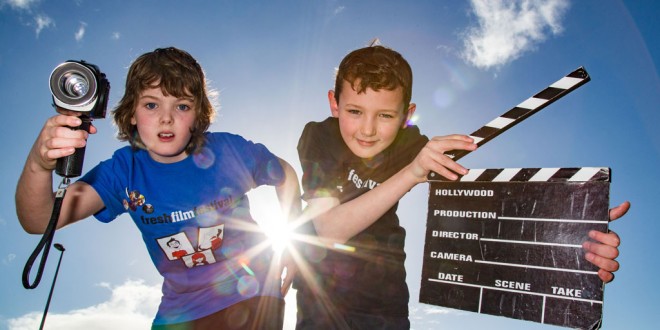 Trinity and Eden Minehan were presented with their award by TG4 television presenter, Micheál Ó’Ciaraidh at Fresh Film Festival.

More than 40 short films, made by primary children from around Ireland, were screened at the festival in the Odeon Cinema in Limerick City.

From the spooky to the fantastical, animation to factual, the Minehan brothers faced off stiff competition to scoop first place with Oscar and the Gdoifs, a fun, high-energy film about a lost puppy.

Trinity, aged 11 years, and Eden, aged nine, have been entering Fresh Film Festival with their short films for the past three years. The brothers attend Bridgetown National School and got their whole school involved in this year’s film production.

Festival director, Jayne Foley said, over the past 20 years of the Fresh Film Festival, young Clare people have consistently submitted high-quality and visually beautiful films. “This year, we are once again impressed by the creativity and quality of these young film-makers,” she said.

Previous Improvement needed against Longford
Next Council not tempted by Apple