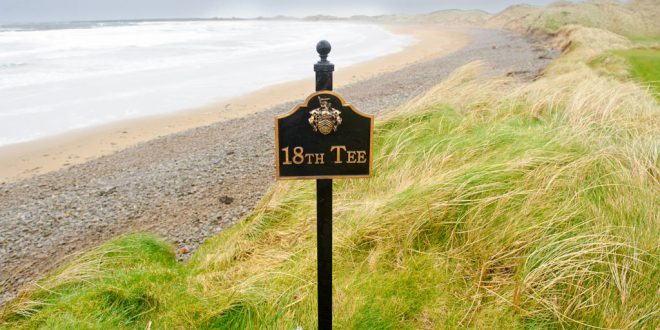 NIALL Cannon’s captain’s prize was played for at Dromoland at the weekend and John O’Donnell emerged as the winner, from Derek McCoy, with Fergus Cooney in third place. Former Clare hurler Alan Markham was fourth, followed by Darren Sherlock in fifth, Derek Ryan in sixth and John O’Grady in seventh. Jason O’Leary won the gross.

The past captain’s prize was won by Martin O’Mahoney, while the over-18 handicap section winner was Philip Hehir. Brendan Hughes and Noel Stapleton won the nines, while the student winner was Gavin O’Reilly, the junior winner was Ryan Foley and the guests’ section was won by Glenn Staunton.

Sandy Smith won the men’s captain’s prize to the ladies, from Katrine O’Neill, with Anne Nix third and Geraldine Ryan fourth. Suzanne McConway won the gross, while the nines were won by Shelly Bennett and Colette Colleran.

Last week’s nine-hole competition was won by Ryan Foley, with 21 points, from Diarmuid McMahon, with a similar score and Ronan Mullane, with 20 points.

The Friday open singles was won by Robert McNally, with 46 points, from Killian Howard, with 40 and Sean Burns, with 38.

ENNIS President Joe Carmody’s prize to the ladies was won by Sarah Cunningham (1), with 35 points, from Della Burns, who had a similar score. Clare Ruane (16) was third, with 44, followed by Mary Lenihan (15), with 34. Shannon Hegarty (6) won the gross, with 22 points.

In the nine-hole Stableford competition last week, the winner was Teresa Felle (35), with 16 points.

The winners of the Wednesday nine-hole scramble were Johnny Kearse, Peter Quinn and Michael Dempsey, with 26.2, from Pat McInerney, Pat McCarthy and Michael Cummins, with 27.1. Third spot was filled by Jim Casey, Mike Irwin and Jimmy Kearns, with 29.0, while Paul Nihill, Roger McMahon and Chris Whithey were fourth, with 29.1.

The Tuesday fourball winners were Tommy Timpson and Jim Horgan, with 36 points, from Joe Griffin and Michael Kearney, Paul Higgins and Johnny Kearse, Sean O’Gorman and Padraig Ryan, each with 35 points.

In the senior ladies’ competition last week, the winners were Eileen Daly, Mary Murray and Kathleen Pyne, with 37 points. They won from Emmanuel McMahon, Bernie Brooks and Carmel Verling, with 35. Third spot was filled by Nuala D’Auria, Loretto Torpey and Angela Gough, with 34.

The senior men’s section held a three-ball scramble last week, in which 60 players took place. The winners were Sean Fitzpatrick, Johnny Cullinan and Jack Keane, with 72 points, from Pat Murphy and John and Aidan Guilfoyle, with 71. In third spot, with 70 points, were Andy Cregan, Jim Hennessy and Steve Burns, followed by John Ryan, Pat Cahill and Willie Delaney, with 68; Paddy Rynne, Jim Felle and Pat Cahill, with 68 and sixth spot filled by Charlie McEnery, Joe Carmody and Michael Butler, with 67.

The June senior mixed for the Eddie O’Mahony memorial prize was won by Michael Ryan, Margaret Clune and Josephine O’Connell, with 33.56, from Sean Moran, Michael Hogan and Marian Brennan, with 35.33. Third spot was filled by Agnes Shannon, Bernard Coleman and Dermot Hammond, with 36.22.

The vice captains’ (Alan Howard and Mary G Nolan) mixed competition was on Friday evening and the winners were Pat Shannon (Kilrush), Gerry O’Malley and Ann Duggan, with 35.33, from Declan O’Donovan, Mary G Nolan and Freda Moran, with 35.67, while third spot was filled by Shane Lillis, Loretta Maher and Rebecca Brew, with 37.11.

The men’s singles at the weekend were won by Joe Linnane, with 42 points, from Michael Ryan, with 41; Pat Shannon (Kilrush), with 40 and Declan O’Donovan, with 39.

There will be a men’s open singles this Saturday and Sunday, while the captain’s (Cyril Kelly) prize will be played for on Saturday week.

In the senior men’s section, the winner was Charles Stuart, from Joe Moloney.

The winner of the Thursday singles was David Moloney, with  39 points, from Michael Lydon, with 38. The team-of-three winners were Ger Hogan, Sean Kelleher and Jamie O’Brien.

Ennis will host the annual competition for the Hillery Cup on Monday next, June 18, when the tee will be available from 2pm to 5pm. All teachers, past and present, are eligible to compete for this cup. For the first time in the history of the competition, there was a lady winner last year, with Helen McMahon taking  the honours. Those who plan to play are asked to text Pat at 086 1557937 for a tee time.

The next outing of Cratloe Golf Society will be the captain’s prize day (Tony Pearl) and it will take place next Saturday, June 16 at Ballykisteen, with tee times from 10am to 11am.

The society’s last outing was to Shannon. Emma O’Halloran was the winner, with 38 points, from Mike Sweeney, with a similar score, while Danny Chaplin was third, with 37.

The nines were won by Batt Crowley, with 20 points and Tony Pearl, with 18 points.

Sixmilebridge Golf Society members will play for their president’s (Mervyn Frazer) prize at Nenagh on this Saturday, June 16 when the tee will be reserved from 10am.

First prize this year is an overnight stay in Treacys Hotel, Waterford, for four people and a fourball in Waterford Castle Golf Course.

Teams of four can enter and the best two scores on each hole count. The presentation of prizes will take place afterwards in the Éire Óg clubhouse. To book a tee time, contact Sean O’Meara on 086 3337614 or Brian Cooney on 086 8515195.

The ladies 18-hole stableford competition was won by Catherine Murphy, with 41 points, from Kathleen O’Brien with 36 and Siobhan Shanahan, also with 36. Bernie Cox was this week’s winner with 45 points, from Noreen Doyle on 42 and Noreen O’Grady, also on 42.

CLARECASTLE Golf Society will hold its next outing at Portumna on Saturday, June 23 when the first tee is reserved from 11.50am. Members and guests intending to play should text 085 2424539 to secure a tee time.

West Clare native Peter O'Connell has worked for The Clare Champion for 12 years and covers everything from sport, especially GAA, news, features and has been even known to branch into the fashion scene on occasion.
@@westclarepage
Previous Flight diverts to Shannon after bomb scare
Next United plane to leave Shannon following bomb hoax

Drugs worth €97,000 taken off Clare Streets for Christmas