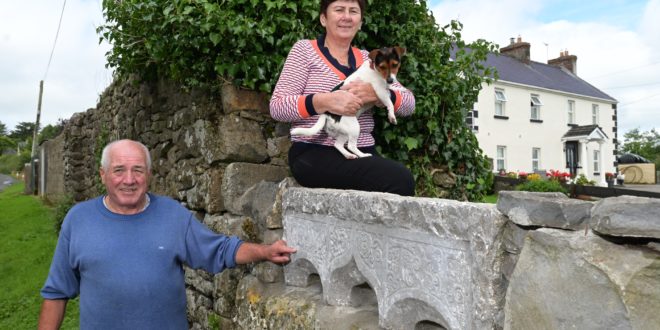 Ger and Rose Reid of Drummin, Ardnacrusha, with the 1579 window lentil from Drummin Castle on their property. Photograph by John Kelly

Last stone of Drummin Castle preserved for the future

THE last remaining stone from a 16th century castle in South-East Clare has been cleaned and mounted on stone to display unusual carvings.

A carving, initials and a date of 1579 was discovered on a late-medieval carved window-head at the site of Drummin Castle, near Ardnacrusha.

The carving was located in the wall of a shed, but was previously covered with several layers of whitewash.

The owners of the site, Gerard and Rose Reid decided that the site and stone was so important it should be remembered in some fitting way and they placed the carving on a stone mounting as a display.

Martin Breen and Risteárd Ua Cróinín visited the site last December, having previously surveyed the castle remains back in December 2002 as part of the OPW survey of towerhouses and castles in Clare.

During the survey in 2002, Mr Breen recalled the then owner, a Miss Long, the aunt of the present owner Gerard Reid, allowed them to copy a photo of the castle in the 1920s. This photo has since disappeared.

Situated about one kilometre north west of Ardnacrusha are the scant remains of Drummin Castle. Nothing of the original structure exists today apart from a small section of masonary wall on the road boundary beside a two storey farmhouse.

Part of a base batter can be seen at the base of an adjoining stone shed. Set into a garden wall is the carved head of a late mediaeval triple light window. The centre light is ogee shaped while the side lights are ached.

A history of Drummin Castle was compiled by Risteárd Ua Cróinín and Martin Breen in The Castles and Tower Houses of Clare.

The castle of Drummin was built about 1579 by Fineen MacMamara. Very little information survives about the castle or its occupants, which is often the case where no events of historical significance occurred within its walls.

It is believed Fineen MacNamara may be the same Fineen referred to in some documents as Fineen “Meirgeach” (the freckled) MacNamara of Roseroe Castle. He was the great grandson of Síoda Cam MacNamara founder of Quin Abbey.

The castle does not appear on the 1570 or 1574 castle lists, adding some proof to the date of 1579, which is quoted as its date of erection.

Fiona McGarry joined The Clare Champion as a reporter after a four-year stint as producer of Morning Focus on Clare FM. Prior to that she worked for various radio, print and online titles, including Newstalk, Maximum Media and The Tuam Herald. Fiona’s media career began in her native Mayo when she joined Midwest Radio. She is the maker of a number of radio documentaries, funded by the Broadcasting Authority of Ireland (BAI). She has also availed of the Simon Cumbers Media Fund to report on development issues supported by Irish Aid in Haiti. She won a Justice Media Award for a short radio series on the work of Bedford Row Project, which supports prisoners and families in the Mid-West. Fiona also teaches on the Journalism programmes at NUI Galway. If you have a story and would like to get in touch with Fiona you can email her at fmcgarry@clarechampion.ie or telephone 065 6864146.
Previous First live performance in months for glór a sell-out
Next Munster Rugby Academy player tests positive for Covid-19 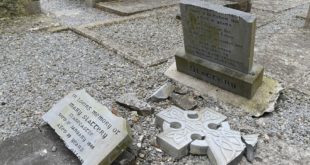 New taskforce to tackle desecration and damage at Clare Abbey 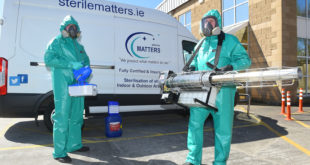 Ardnacrusha company has the gear to kill Covid-19 virus