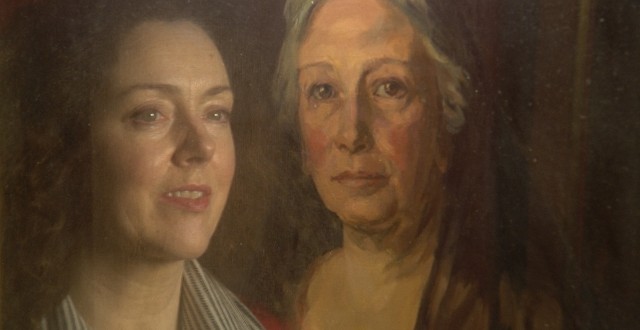 Actress Derbhle Crotty presenting an episode of RTE's Fire in the Blood on Lady Augusta Gregory.

FIRE in The Blood, a series of four programmes on the Celtic Revival begins on RTE One tonight (February 29) at 8.30pm. It focuses on four areas of the revival: drama; the Irish language; art; and, sports. Each episode will focus on one individual who played a central role in the Revival, including Lady Gregory and Michael Cusack, and will be presented by a contemporary figure who can speak with credibility about that individual – assessing their lives, and the influence of their work.

The Celtic Revival was a broad-based cultural movement whose stated purpose was to address many diverse areas of Irish life – literary, linguistic, visual and sporting. The purpose of this four-part series is to give a real sense of the breath of those ambitions and the scale of their impact on Irish society.  The Celtic Revival contained a number of outstanding and colourful individuals, but producers selected four who they believe will provide insights to some of the major areas in which the Revival was involved.

The first episode, on Lady Gregory, will be presented by Derbhle Crotty. Born into Ireland’s landed gentry, Lady Augusta Gregory and did not begin to write in earnest until she was middle-aged and a widow. A key event was her meeting with WB Yeats in 1896. This led to a close and intense relationship that lasted for the remainder of her life.

For Yeats, she was “mother, wife, sister, friend” – and he relied on her for both emotional and material support. Together they founded, first of all, the Irish Literary Theatre – and then, in 1904, the Irish National Theatre Society, which became, in turn, the Abbey Theatre.

Her profile will be presented by Derbhle Crotty – a distinguished actor who, like Lady Gregory treaded the boards of the Abbey Theatre.  In her distinguished and award-winning career, Derbhle she has played many of the classic roles in Irish drama – both inside Ireland and abroad. She even played Lady Gregory some years ago in a Peacock production of a play by Colm Toibin. She is will play Juno in the upcoming Gate production of O ‘Casey’s famous play.

Anna Geary will present the programme on Michael Cusack, founder of the GAA.