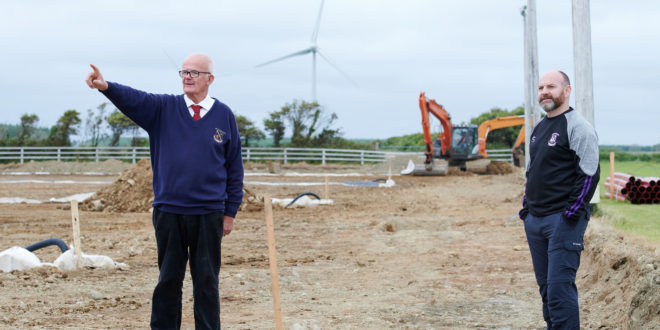 David Glynn, President Kilrush RFC And Andy Burke, Director of Rugby on site of Phase One of the new second pitch development as part of their development plan for the club and for the health and we’ll being of west Clare communities. As part of their fundraising campaign, they have launched a Gofundme page to support Phase 2 of the plan which includes a floodlit running track. Photograph by John Kelly.

The sporting landscape around the country might have been at a standstill for the last few months, but behind the scenes, one West Clare club was putting plans in place to take their development to the next level.

Kilrush Rugby Club is based in Monmore, and in recent years the influx of younger players in particular has seen the club producing some brilliant talent across the girls and boys divisions.

That success has also accelerated plans to rejuvenate the adult section of the club, with recruitment currently underway for both a men’s and women’s team for the coming season.

Director of rugby in Kilrush, Andy Burke, outlined where the idea for the project came from

“One thing that needed to happen was for us to develop and grow the club because we have huge numbers of younger players coming in at the moment so we needed to expand to facilitate them into the future. We sat down as a committee and decided the time was right to take this project on and once the construction teams were back on stream, we kicked on with our plan. We want to make this a great facility for West Clare. It is not going to be about a facility just for the club, this will be for the entire community. We are putting in a floodlit area and there will be a 500m walking track around it so people from across the West Clare region will be welcome to come and use it. Parents or guardians can come and drop their child to training and have their own time to walk around the track if they want. We feel it will be of great benefit to the entire region so we are excited to be going ahead with it,” he stated.

For club president David Glynn, the project is a source of great pride. As a stalwart of Kilrush Rugby Club, Glynn was one of those who soldiered through difficult times to keep the club afloat. He says that tradition is important to stay mindful of.

“There are very few rugby clubs who have two pitches so it is fantastic for Kilrush Rugby Club to have that now, so we are looking forward to the next few years. I can remember back in the 1970’s when we played in four different grounds. The only access we had to one of those was to climb over two ditches and that is just one example. We had another place where there was just one shower for 30 players and after the first two had gone in, the water would be cold. That is just an example of how far we have come now. It was a struggle from that start but we have had brilliant support. There is a great tradition in the club going back to 1924 when it was founded and a lot of families who have put a lot of work in for Kilrush Rugby Club. Our ambition is to get our men’s senior team up and running again. We have a great committee and it is not like the old days when it was one or two people trying to keep it going. We have very dedicated people working hard so the future is looking very bright. We always say that while it might be called Kilrush Rugby Club, it is really about the whole of West Clare,” he noted.

Kilrush Rugby Club has enjoyed great success in recent years in girls rugby, and one of the coaches involved with those underage teams, Suzie Glynn, is hopeful the development of a women’s team will entice those underage stars to continue with their home club.

“We got to two Munster finals this year which ended up being called off but it really great to get there and there was a great buzz because of it. This year we are trying to get a women’s team going and we have 40 names at the moment of people who are interested. The prospect of having all this development is leading to a really positive mood around the club and it will be great for everyone. It was a brilliant achievement for the girls to get to those finals last year and with the women’s team building, it means they can continue with Kilrush and don’t have to go off travelling to continue their careers. They are really excited to be doing that so it is great to be able to show them that we are serious about their development. We have a plan in place for them over the next few years so that we can keep them here as Kilrush girls. It is all about showing the younger players that there is something here for them to aspire to,” she outlined.

Works on the new development are well underway while the club has also launched a GoFundMe campaign in order to aid financing the project. Funding has also been secured via the Sports Capital Grant with the matched funding required to complete the works. Burke says it will be facility for the wider community to enjoy but one which he hopes will continue to drive further progression on the field.

“What we are trying to do is build a rugby community in West Clare so to be able to put the facilities in place for all members is great. We are a family club so we have the younger members right up to the adult teams. We also have our older members coming back in with great stories of the games they have played in all over the country. We want to put the infrastructure in place that we can support them and hopefully continue to grow the club. We have some fantastic support and some brilliant players come out of this club. Last year alone we had six underage players on Munster teams so we want to make sure that all the facilities are in place for them to grow and be the best players they can be to fulfil their potential. We run on the one club mantra and we are all in this together. We have coaches helping out across all the teams and we have great people working across the levels who all understand that it is about the whole club and helping people to develop. We want to see a massive resurgence of rugby here in West Clare and get back competing at Munster level and become one of the top tier teams” he said.

Suzie also stated that they are hopeful of continued growth for the women’s team in the club and is encouraged by the numbers who have already expressed an interest in getting involved.

“Once we put out the feelers to see who would be interested in playing women’s rugby, I was shocked at the amount of names that came back. We have girls from all over the West Clare area who want to play so it has been great. There is great momentum behind women’s rugby at the moment and it has become really popular and we can see that ripple effect here in the amount of girls and women who want to get involved. There are not too many outlets for women around West Clare in a sporting sense. The idea is to draw people in and create that team environment for people who are based here. The thing I would stress about the women’s team is that absolute beginners are welcome to come. Rugby has exploded in recent years but a lot of that has come from women who have made the transition from other sports. Everyone is welcome and there will be people starting at different levels so anyone that wants to come along will be more than welcome,” she concluded.