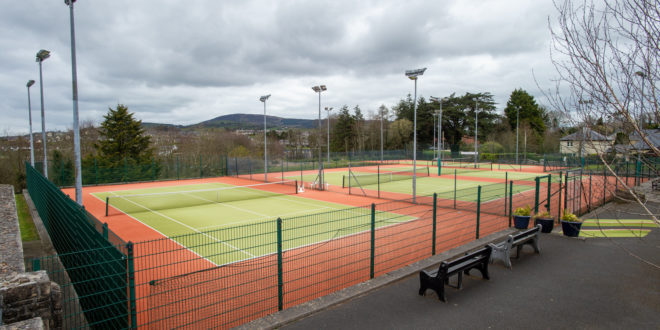 A LOCAL tennis club look set to make their own piece of history by becoming the first committee outside of Dublin to provide a permanent covered tennis courts as part of a major development estimated to cost in excess of €740,000.

Killaloe Ballina Tennis Club has served up an impressive volley in terms of new facilities with a plan that will make them the envy of clubs throughout Munster once they come to fruition.

Officers have already won a number of key matches, having secured planning permission as well as raising a massive €480,00 through fundraising, grants, club funds and donations.

Club chairman, Patrick Seymour told the Clare Champion once the development is fully completed, it will provide the only permanent covered structure outside Dublin.

“Killaloe Ballina Tennis Club will be the only club in the Mid-West that will have indoor facilities.

While the facilities are for the benefit of club members, it will be a major addition to recreational facilities in the region,” he said.

There is a tennis club in Galway with a so-called “bubble” inflatable cover that can be taken down during the summer. Shankill Tennis Club in Dublin already has the benefit of similar type of facilities that are planned on the banks of Lough Derg.

Over the last seven years, the club’s development committee has been preparing a long-term development programme that will see two additional indoor courts and an outdoor mini-court with practice wall added to the existing club along with other club facilities.

This will position the club as a forerunner in the development of indoor tennis facilities outside of Dublin.

Mr Seymour explained the club felt in the long term it would be better to cover the new tennis courts rather than try and cover two existing courts, which weren’t purpose built to be under a roof.

Having regard to the zoning on the site, the existing established use on site and the pattern of development in the area, the planning authority decided the proposed development would not seriously injure the amenities of the area or of property in the vicinity and would be acceptable in terms of traffic safety.

Final figures for the cost of the overall development aren’t available yet.

Under phase one, it is estimated that the reparation of the ground work, erecting the covered structure and completion of the foundation for the two indoor courts will cost €530,000.

In the second phase, laying of the artificial grass surface for the new courts, flood lighting, ventilation, fencing, footpath surfacing and landscaping is estimated to cost €210,000 while the
junior mini-court and practice wall will be built in phase three.

To date, over €280,000 in grants and external donations has been raised.

When combined with club funds, the club currently has €480,000 of the required funds for phase one in place but needs to conduct fundraising to make up the shortfall.

Work is already underway for grant applications to facilitate completion of phase two of the project. At this point in time, the development committee has acquired considerable experience in grant applications and is confident that additional grants can be secured for phase two.

It is expected that work on the first phase of this ambitious development will get underway over the coming months depending on how much Covid-19 restrictions impact finalising plans and the construction phase.