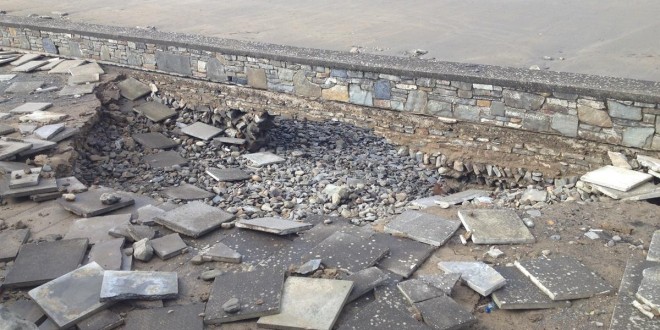 THREE weeks after Storm Darwin resulted in serious damage to the seawall and the Strand Line in Kilkee, the damage is still evident on the seafront.

The issue was raised at this week’s West Clare Electoral Area meeting by Councillor Patrick Keane, who asked for a report on what he called “the sinking Strand Line road,” in Kilkee.

Loop Head Tourism chairman and Kilkee business man, Cillian Murphy has also expressed concern at the state of the Strand Line, comparing it to a war zone.

“I’m standing here looking at a hole that has been dug out of the pavilion in front of the Esplanade. It must be 30 feet by 40 feet. There was a small breach but the sea is after widening the breach and sucking everything out from underneath it. A load of concrete would have shuttered up the front of it and prevented further damage,” Cillian Murphy suggested.

“From the esplanade down as far as the band stand, there has been no attempt to shift slaps, rock or sand. It’s like a war zone here and we’re three years after the fact. I appreciate that there are place where there are serious structural concerns but this is just a tidy up job. Five men with a mini digger, clearing stuff away would sort it out. I have to question the priority the council put on Kilkee,” he added.

Mr Murphy said that the clean up was beyond the remit and capability of the local community.

At the meeting in the Vandeleur Walled Garden, Kilrush, area engineer, Cyril Feeney said that the council has engaged the services of a specialist consulting engineer to examine the problem.

“Before reaching a conclusion on the matter, we need to make observations over a period of time to ascertain movement patterns so that we can understand the mode of failure and therefore be in a position to deal with the issue most effectively,” he explained.

“These observations are ongoing at the moment and on foot of that a number of remediation options being considered. The likelihood is that some specialist underpinning and stabilisation works will be necessary and we hope to reach a conclusion regarding the detail very shortly, with a view to having a remediation contract in place within a few weeks,” Cyril Feeney stated.

He acknowledged the urgency of the situation given the importance of tourism to Kilkee.

“We are of course conscious of the importance of having this issue fully dealt with in time for the forthcoming tourist season,” the area engineer noted.