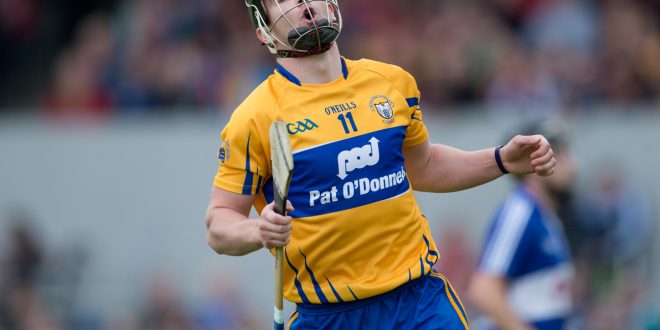 CLARE opened their Allianz National Hurling League account with a wide-margin victory over Carlow in front of 2,283 in Cusack Park this afternoon.

The Banner flew out of the traps and an early Shane O’Donnell goal was the catalyst for Clare’s success, and they eased their way to two points. Tony Kelly was the star of the show with 0-12 (0-7f) to kick-start Brian Lohan’s reign in the league in the perfect way.

The game got off to a flyer in Cusack Park with five scores in the first two minutes, with Shane O’Donnell bagging an early goal thanks to great creative play from Ian Galvin to tee him up.

Martin Kavanagh registered six of Carlow’s nine first half points and he as well as, John Michael and Chris Nolan slotted over early scores.

Tony Kelly, Ian Galvin and David Reidy tormented Carlow with their speed in the middle third and Kelly landed five in the first half (two frees).

All of Clare’s forwards were on the scoreboard after 18 minutes when John Conlon rifled over a 21-metre free. Clare appeared to be coasting but eight first half wides, as well as three Martin Kavanagh frees, and a second John Michael Nolan point ensured Carlow stayed competitive, and the half-time score read Clare 1-12 Carlow 0-9.

The third quarter was played in a pedestrian fashion as Kavanagh and Kelly traded frees while Davy McInerney joined in on the scoring with a monster point from midfield, as David Fitzgerald and Shane O’Donnell added to their tallies.

Clare were easing their way to victory but in an unpolished manner at times.

Tony Kelly’s eye was most certainly in, though, and his dominance ensured he had 11 points registered within the hour mark.

A late flurry of points arrived for Clare when Carlow accepted their fate, as John Conlon capped his first game as Clare captain with two late scores.

Meanwhile 19-year-old Aidan McCarthy impressed at half-back and landed two long-range scores in the closing stages to advertise his candidacy for a continued starting role.

The straight red for Edward Byrne in the 61st minute for a strike on McCarthy compounded Carlow’s misery on a tough day.

Clare will face a much tougher test next Sunday when they make the journey to Wexford Park to take on Davy Fitzgerald’s charges.

For a comprehensive match report, reaction and analysis, pick up a copy of next week’s Clare Champion.