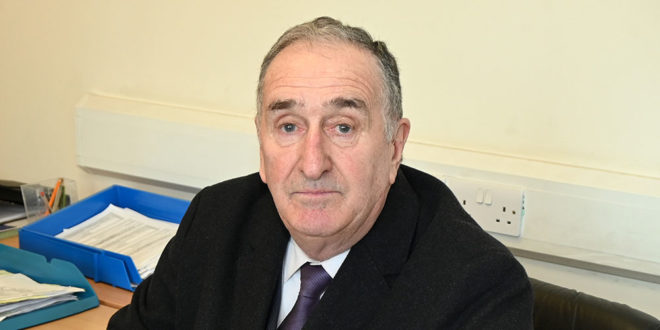 A legend in Clare motoring circles is calling it a day this Friday. James Hehir, who started his career in the motor industry almost fifty years ago, will sell his last car this week at Sheils Motor Group, main Ford and Honda dealers on the Gort Road, Ennis.

In a neat twist to the story, James’ career began at Sheils in 1971 where he started off straight away in car sales. At the time, the showroom and garage were located in the centre of Ennis, by the river near the CBS. There were only a few car showrooms in Ennis at the time with James recalling just Volkswagen and Morris.

Ford, especially in the 1970s were seen almost as an Irish car company with their plant in Cork, the first to be built outside the US in 1917. That loyalty was repaid in car sales with Ford the undisputed number one. The big seller was the Escort, a revolutionary car with its tidy rear wheel drive handling and rack and pinion steering. For families, the Cortina was the choice and those looking for more luxury could choose from the Cortina 2000E, the Consul or the Granada, which was also available as a very handsome coupé. The most famous coupé of the period though was the Capri, which clothed Cortina mechanicals in a swoopy shape to create ‘the car you always promised yourself’.

James enjoyed his time at Sheils before deciding to do something for himself in 1984 when he set up Cahercalla Motors and took on the Mazda franchise in Clare. Japanese cars were introduced to the Irish market in the early 70s and their reliability and standard equipment quickly found fans and they began to make inroads over the traditional makes. James was the first to sell Mazda in Clare and it proved to be a good move with cars like the 323 becoming family favourites.

In 2007, James retired for the first time, although Cahercalla Motors continued on under new ownership. He couldn’t leave the motor trade behind though and continued to buy and sell cars. I remember at the time meeting James at some filling station in the midlands and we had a chat. He was after delivering a car to a client in Dublin and bought another car at an auction to drive back down to Ennis.

His first retirement didn’t last long as he was asked to come back to Sheils in 2008 initially for six months but in 2010, he came back full time to car sales where he has remained ever since.

The big changes he’s seen over the years is the change in car finance. When he started, cars were bought on finance but it was always a straight loan, whereas now, PCPs have largely taken over.

He says he’ll miss the buzz and the craic of the showroom but won’t be overly displeased not to have to put a suit and tie on every morning.

As for plans for his retirement, he intends to spend more time on his other love, fishing. He’s had a few boats down through the years and there’s probably another one on the horizon.

Thomas Sheils, Managing Director and Eddie Rynne, General Manager acknowledge the huge contribution James has made to the company and wish himself and his wife Detta all the best in his retirement.