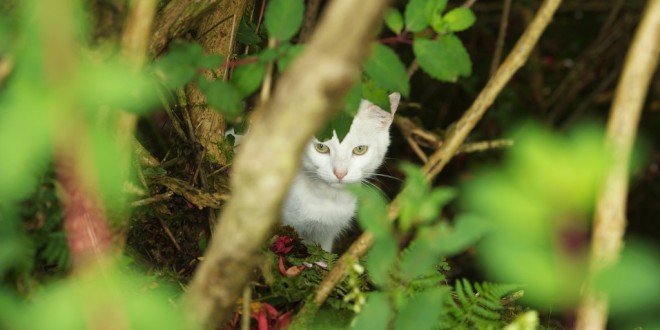 A shy resident at the "An Cat Dubh Sanctuary" at Clounlaheen, near the Hand. Photograph by John Kelly.

RHONA Lucas laughs when she is asked to describe herself. She lives with 147 cats, five dogs, three donkeys and a posse of nine visiting foxes in Cloonlaheen East, not far from Mullagh. With the odd exception, she knows the name of most of her cats, who reside in the An Cat Dubh Sanctuary in the tranquil surrounds of her relatively new abode.

[doptg id=”33″]“My view is that eccentricity is interesting,” Rhona replied, when asked was she perhaps slightly odd. “If we were all the same, it would be very boring. If you met me I clearly am not mad. I just believe that animals deserve to be treated with respect,” she explained.

Intriguingly, Rhona also gets on with people, as her former Galway-based vet attests.

“They always said that they loved working with me because I clearly liked people as well. A lot of people in the welfare business sadly don’t like people. They’re much better with animals and they fall out with each other,” she observed.

Rhona has lived near The Hand since last October, while her husband is still in Loughrea trying to sell their house. Her cats seem happy but it’s not all a good luck story.

“I had a peacock when I arrived but a fox made short work of the peacock,” Rhona revealed somewhat glumly. “So I have to keep my hens in a closed run and shed. I’m feeding nine foxes. They come and help themselves to the cat food and the cubs come right up to the front door. They wait until I put out the decent stuff. If I put out the dry food they take a mouthful of it and spit it out. They’ve obviously acquired a taste for better eating,” she surmised.

The cats sometimes lay down the law to the visitors. “Sometimes, the cats will chase the foxes off if they’re a bit fed up with them, although they don’t bother the foxes normally. The cats generally sit alongside them,” Rhona has noticed.

The 147 cats rub along fairly well although there is the occasional eruption.

“In the main they get on very well although the one that chases off the foxes also has a bit of an issue with some of the cats. But there is enough space for them to find their own little niche. If there are any that are getting picked on, I separate those. I’m aware of which ones tend to bully and which cats they tend to bully,” she said.

Incredibly, Rhona can identify most of the cats by name, although a handful are a bit similar.
“They all have names. They all have a little index card with their name and their medical history. If you ask can I tell everyone apart, some of the black ones are hard to distinguish. If they’re not missing an eye or haven’t got a shiny nose for example, it can be tricky. I can tell you the names of virtually all of them aside from that.”

Some of the cats have leukaemia and other serious illnesses. Rhona ensures that any animal that suffers is put to sleep. She feels that humans should be accorded the same right in the event of them suffering prolonged pain.

“I give them a good life and I need to give them a good death as well. I often think that animals have a much better deal than people who often want to finish their life but are kept going. At least with cats, you have an option of ending their suffering in a quiet and dignified way. I nursed my father-in-law for six years. I used to watch him suffering. He didn’t want to live, yet he had to, whereas I can take my animals to the vet and end that suffering,” she reasoned.

Rhona worked as a social worker in Portsmouth for many years before returning to her father’s native country almost nine years ago. James Lucas was from Whitegate.

“Because I brought cats and dogs with me to Galway, people in the locality realised I was an animal lover and started bringing me their animals and asking me if I could take them. Clearly I didn’t have the space for lots of large animals but I also got into trapping and neutering feral cats. They are an uncontrollable problem in Ireland because people don’t act responsibly and don’t neuter and spay their cats,” she believes.

“I got into trapping and neutering in quite a big way for a one-person operation. I often had to work really hard to get farmers and others to agree. They would maybe agree to the females and not the males. A female can have up to 30 kittens a year while a male can father thousands and will go up to 10 miles looking for a female in season. It’s just as important to neuter the males,” Rhona stressed, noting that feral cats can be tamed.
“There is a theory that it’s not possible to tame feral cats. But if you have enough patience and enough time, it is possible to tame most feral cats because they are descended somewhere along the line from domestic cats, that have been abandoned,” the gregarious pensioner pointed out.
Rhona erected a sanctuary sign outside her house in West Clare last Wednesday week. The reaction was immediate.

“When I came out first thing on the Thursday morning, there was a very distressed cat in the hedge wailing. It took me all morning to catch her. I then took her to the vet because I thought she’s obviously in pain. She was in labour and Summerhill Vets scanned her and found five little heartbeats. Within an hour of bringing her home she delivered the first one,” Rhona recalled with some pleasure.

Her love of animals is matched by her infatuation with her new home in Cloonlaheen East.
“The view is beautiful. You can see Doolough Lake and when I walk the dogs up on the bog you can see the Atlantic,” she reflected fondly.

Previous Unchanged Clare to face Kildare
Next A one-job county