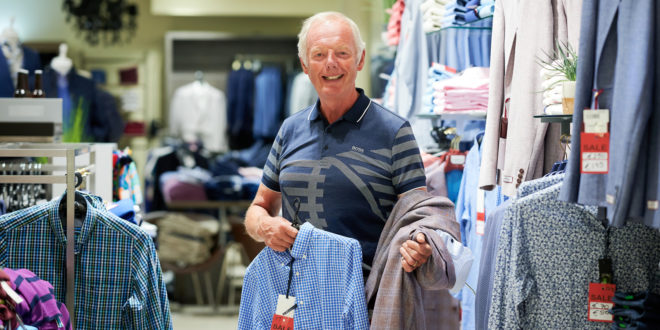 Patrick Bourke prepares for the re-opening of his shop on Parnell Street, Ennis. Photograph by John Kelly

When the restrictions around Covid-19 were introduced, it meant that he literally could not work and he says it was the first time in 45 years not being at his business on the few bank holidays that fell during that time.

On Tuesday, he was getting ready for reopening next week and his enthusiasm was unmistakable, even refreshing.

Like a small child on Christmas morning, he hadn’t been able to rest, so keen was he to get back to work in his shops in Ennis and Kilrush. “I was awake at 5am and out of the bed at 5.20am. I had the front of the shop swept before the council workers started at eight o’clock this morning!”

They will have nearly a week of preparatory work before the real thing starts next Monday. “Officially, next Monday is our first day back but we’re back preparing for reopening today. We’re opening with our summer sale next Monday to give people an incentive to come out and support local. “We have Father’s Day two weeks after that. Fathers have come out of this having earned a lot of kudos, either working through the Covid or being at home and working even harder through the Covid!”

He says he has spent €3,000 on equipment and materials so that they can trade safely next week. One senses that he paid it fairly gladly, so desperate is he to get back. “I’d open up in the morning to give stuff away for nothing! I’m just dying to get back to work,” he laughs.

Of an age now when people often start preparing to take things easy, he doesn’t intend to do that yet and says the break may have extended his tenure. “The comparison I used to somebody is a sportsperson, who is kinda pushing towards the end of their career. I’m 63 in a couple of weeks but I have no notion of retiring and this has rejuvenated me.

“Paul O’Connell got a break late in his career and a few GAA players did too and it gives you an extra buzz when you go back.”

He has seen lean times for business before and while another one is coming, he doesn’t think it’ll be like the abysmal crash that the country isn’t long recovered from. “I’m going into my fourth recession. When I left school in the early ’70s we had one; that was the first one. Out of 55 in my class, only five of us stayed in West Clare. Looking forward to 2021, I think it’ll probably be something like 2017 or 2018, 2017 maybe, because 2018 was a very good year. It’ll probably take us two to three years to rebound and the rebound will be different. It won’t come back like it was but it will come back.”

A summer sale with very large cuts will greet the first customers to arrive next week and while he expects a surge, he also knows that it won’t go on indefinitely. “I’ve been studying a lot of what has been happening on the continent and places that are weeks ahead of us, also listening to economists and people in the know in Retail Excellence and organisations like that. ]

Every sort of social event or celebration has been cancelled and the impact of that is going to be felt for a while.

For instance, the Galway Races is one of the summer fiestas that has bit the dust and which the men of Clare would have bought new clothes for. “Anything like that, that a man needs a shirt for, they’ve all been cancelled. People will be buying out of necessity, rather than buying for occasions.”

The business doesn’t have a website where one can purchase clothes yet and it was to its detriment over the last few months. “We’re a very open and personable business, very customer and face-to-face oriented. A few years ago, I was going hell for leather into it, then I thought we’re so customer focused that if I put more money into advertising that would more than make up the balance and it did but we were caught out,” he stated.

That is about to be put right, with a transactional website due to go live in the next few months.

A big void in Patrick’s life will be filled within days and he is thrilled. “Everyone is back, all the familiar faces are here to meet the customers. We’re looking forward to it. Even if they only want to come in for a chat, we’ve no problem with that; we’re just dying to get back to it,” he concluded.

Owen Ryan has been a journalist with the Clare Champion since 2007, having previously worked for a number of other regional titles in Limerick, Galway and Cork.
Previous July 31st Start Date On The Cards For GAA Club Championships
Next council faces €19.7 million deficit