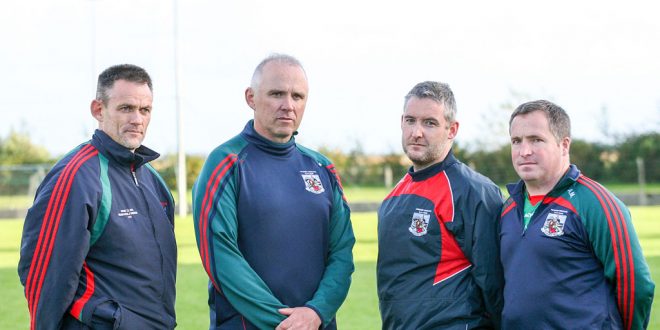 A championship-winning captain in 1993 and 2002, Aidan ‘Horse’ Moloney picked up his third medal in 2004. Player-manager as far back as Kilmurry’s 1999 county final defeat to Doonbeg, Moloney has extensive club management experience built up since 2006.

Over the last 10 years he has managed Shannon Gaels, Cooraclare, Kilrush and Kilkee, bringing Kilrush to within a point of Kilmurry in the 2012 county semi-final replay and winning a Cusack Cup with Cooraclare in 2009.

Moloney played in five county finals with Kilmurry but it wasn’t all rosy in the garden. Incredibly, Kilmurry did not win a single championship game in Moloney’s first 10 years of playing senior club football.

“When I could kind of play football, we were struggling. We were harmless enough,” is how the 1992 Munster championship winner with Clare phrased it.

“We won a minor in 1980 and 1981. A lot of that team went on to win the championship in 1993. Martin Cahill, Martin Keavey, Paul Montgomery and Paul Hickey were all on those minor teams. We were in three minor A finals in-a-row. I remember we played a senior championship match against Cooraclare with 12 minors.”

His role as Kilmurry player-manager 17 years ago ceased management-wise, once the ball was thrown in.

“I was doing the training but we had people like Patrick O’Dwyer on the sideline. Once I was playing, that was the end of my say. I was involved in picking the team but once I went on the field, I left it to the rest of the management.”

Moloney has learned that while tactics are important, managing players supersedes everything. If the players are with you, a manager has a chance.

“I think reading players is important and seeing are they up to the level that you require. But the most important thing of all is getting fellas to play for you and keeping them. If you don’t know where your bread is buttered, you’re not going to last long in this game. Anywhere I’ve gone, I think I’ve got a good response from the players. I’ve very seldom fallen out with them, lets put it that way.”

Moloney admires Cratloe and his respect for their players is clear.

“Going to see them in the semi-final, it was an unreal experience. After 10 minutes, you felt like it was a wasted journey going to Ennis. The game looked over but after that it was a real compliment to them. They’re a fabulous team. They didn’t panic and there was no indiscipline. They just kept chipping away and you could sense from a long way out that the game wasn’t over. They just got better and better. They have a group of players that have been together now for the last 10 years or more. There’s no doubt they’re a good unit.”

The Kilmurry bench has been talked about as much this season as their starting 15. They have a galaxy of proven footballers ready to flood in when the need is most.

“Our team hasn’t been hard to pick and we’ve had five or six subs that we can call on. Those fellas are good enough to be on the team and normally you’d have to put up with a bit of grief as to why they’re not playing. But they know their role and they’re happy to come on and make a contribution. I think that’s what has got us where we are. All our subs have made huge contributions. We have 29 players in the squad. We have probably 10 subs that we could call on at any time. It just depends on where we need them,” he explained.

Moloney has earned his managerial reigns in Clare over the last decade and now stands an hour from his most significant achievement. A Kilmurry legend from his playing days, if he leads them to glory on Sunday, it will add to his allure in Quilty, Mullagh and Coore.

“It’s fair to say that the two best teams are in the final. It’s a great opportunity for our fellas. They’ve been playing Cratloe here and there for the last few years but this is the first time they’ve met in a final. It’s a big day for both teams and I hope our fellas will relish the challenge,” Moloney concluded.