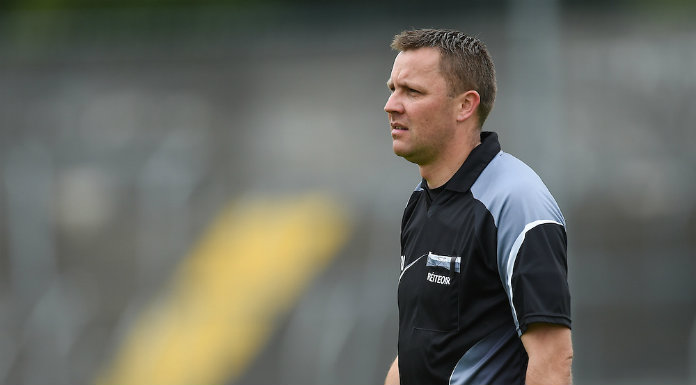 A high profile GAA referee has revealed details of abusive letters which were sent to him during the course of his 20 year stint with the whistle.

Eire Óg clubman Rory Hickey announced this week he is bringing the curtain down on his time in the middle after missing out on the national panel for 2019.

It was in the aftermath of the 2009 Munster football final that he encountered a disturbing incident as an unhappy supporter vented his frustration in the days after the game.

“I got letters sent to me a few years ago. I gave a penalty to Cork in a Munster football final and the people of Limerick weren’t too happy about it. The letters came to my mother’s house and she opened them, and they weren’t too complimentary. Someone had gone out of their way to cut words out of magazines and newspapers so that the handwriting couldn’t be traced. I am not the only one that has happened to. I know other lads at national level who would have had the same thing happen to them. It’s disturbing, and at that stage then you are handing the letters over the guards and hoping that there won’t be repeat stuff or anyone calling to the door. Thankfully I have never had anyone calling to my house because of a decision in a game but I have gotten texts and that kind of thing. People would seek out your number and send you those texts. I am big enough and bold enough to handle that, but when it is going to your mother’s house, or your wife and children might be reading it, it’s not nice” he noted.

He continued: “The written word was the only way people had to criticise you when I first started out. If something was written about you in the paper, it hit hard because your mother and father would be reading it. Things have developed so much now with Facebook, Twitter and all these online forums. It is tough and my wife would be seeing all the things that pop up about me. My daughter is getting older and more aware now and she would be able to read those things too. I do have to say though that the thing with the letters is certainly in the minority and more often than not, lads leave it on the field. Someone might have a bark at you during the game but they will shake hands with you afterwards and that’s that. Some lads get very excited about it and take it that little bit further but as I say, that’s in the minority. I never worried too much about the person who was in the stand because they are going to be roaring anyway. Those type of people are in every club and will be at the county games too. For some of them, I think it is a way of venting a tough week at work by going to the GAA matches and screaming at the players and referee”.

Hickey is not the only Clare referee to call time on his career in recent days, while Clonlara clubman Joe Mullins also stepping down due to work commitments. With the pool of officials shrinking ahead of the busy club championship season, Hickey feels more work needs to be done to ensure no more are lost.

He said: “Lots of people will try refereeing, but hanging on those people long term is a real challenge. Retention is vital because down the years we have seen lads come and go and we couldn’t keep them. They would come and do the course and after getting screamed at in their first U-12 match they were gone. How you go about hanging on to lads is the eternal problem, and also how to make it more attractive to be a GAA ref. Maybe the expenses could be a little better. I know it is not on a par with the likes of rugby or soccer. The lads doing soccer games on a Sunday morning could pick up €60 while the county final here in Clare is worth €40. The respect issue is also massive. I think it’s up to the people in Croke Park to come up with some way of changing the culture around respect for officials. Getting into the schools and having lads that are no longer involved in refereeing going around as GAA ambassadors might be a help and educate them from a young age. I have found that in GAA by the time youngsters get to the competitive stuff, they see the ref as someone who is there to roar at because they have seen it on TV or at adult games”.