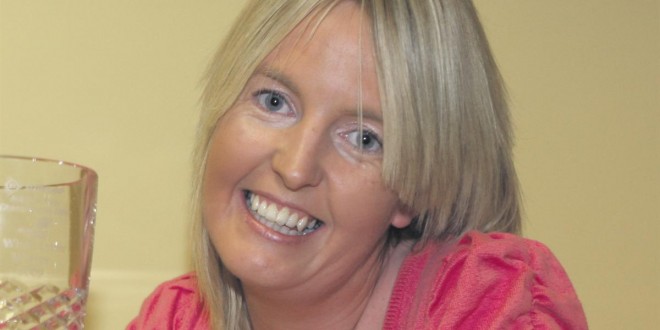 Grainne rallying round despite brain injury

AN Ennis rally co-driver has outlined her delight at having taken part in a 10k charity walk last weekend, just 18 months after a freak accident left her battling for her life.

Grainne McEnery said completing Hurley Hoey walk was a massive confidence boost and compared it to “winning the lottery”. She never dreamed she would be capable of finishing two kilometres, having sustained a serious brain injury.

“Finishing a 10km was like a dream come true. I walked it in one hour and 40 minutes. When I crossed the finish line I was emotional because it was like I won it. I never thought I would be able to do this.

Acquired brain injury has given her a new insight of the challenges other people with disabilities face on a daily basis. Grainne was a passenger in a rally car driven by Mike Quinn from Kerry, which was leading going in the last stage at the Heartlands Rally in Portlaoise during the summer of 2012 when their vehicle collided with a tree.
Grainne will be eternally grateful to a doctor, who decided her serious condition warranted the use of the airmedical ambulance, which transported her within minutes to Beaumont Hospital.

“When you get an acquired brain injury, you will never be the same person again. However, you can get to like the new person too,” she said.

She is now planning to participate in the Pakie Ryan Memorial Walk/Run on Saturday, as she really misses taking part as a co-driver in her lifelong passion – motor rallying.

Having travelled all over the country, she described rallying as her “escape” and made great friends in the sport.
In addition to becoming the first female co-driver and Clare person to win the 2012 West Coast Rally Championship, she has won numerous trophies since 2009.

She hopes recounting her story during National Brain Awareness Week will inspire other people with brain injury to continue to kept battling through their difficult journey and encourage more financial support for Brain Injury Ireland’s fundraising activities.

She still requires a considerable amount of medication to help her cope with severe headaches and blurred vision. It took two driving tests before she was allowed to get back behind the wheel.

“I am still weak on the left side. With physiotherapy, the first two years are the most important to try and regain power. When someone looks at a person with brain injury who doesn’t have any bruises or physical injuries, they don’t understand it. People think if you look ok, you must be grand,” she explained.

She said it would be impossible to thank all those who provided her with support, particularly members and officials of the Clare Motor Club and Mike Quinn, who willingly assisted her at all times.

Each person has a tailor made rehabilitation programme so as to maximise their ability and to provide meaningful outcomes. This includes social work services that support the client with family relationships and adjustment and clinical psychology services for neuro assessments and psychology intervention.

Having returned from Dun Laoighaire, Brain Injury Ireland got in contact with Grainne and offered her fantastic services including a helper to complete certain tasks and a social worker to help her navigate the social welfare system.

Praising the tremendous support provided by BII, she said they have been with her all the way through her physiotherapy programme and will continue to provide support before her scheduled surgery in about four weeks’ time.
The biggest challenge she faced was reintegrating into society after the brain injury.

“I was completely scared of everthing and didn’t want to meet people and became very withdrawn. I didn’t want people to see me the way I was. It was like there was a horn growing out of my head even though I looked like I had previously, apart from the limp in my left leg.

“Gradually the staff at Brain Injury Ireland started reintroducing me to social activities slowly but surely. They assured me this was a common problem for people with brain injury,” she said.