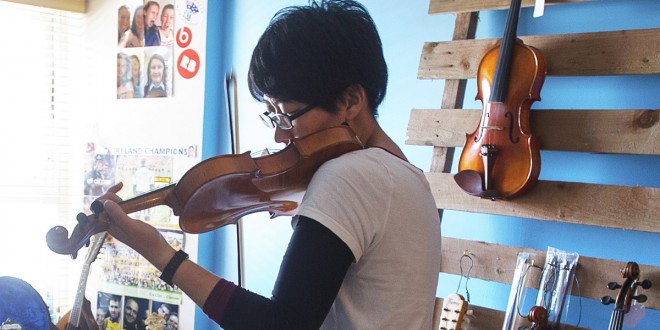 Naoko Matsumopo of Japan trialing a new fiddle in a shop at main Street Miltown Malbay during the Willie Clancy Festival. Photograph by John Kelly.

A group of Germans took a break from the music in Miltown Malbay on Tuesday to celebrate their country’s 7-1 win over Brazil in the World Cup.  They are among a large contingent from all over the world at this year’s Willie Clancy Summer School.

Festival administrator, Harry Hughes, has reported steady participation in most of the classes on offer in Miltown, while the town has been generally busy, day and night.

“We seem to have an enrollment that would certainly match last year. We have an increase in the banjo, fiddle and concertina classes. The piping and other classes would be rather stationery but we are returning the same figures as last year,” he explained.

“The picture seems to be pretty busy. The pubs are busy at night-time, as are the hotels. I think the town has the same numbers back again as they would in previous years. I’ve just come up the town now and the streets are pretty crowded. There’s a lot of action out there,” he revealed.

“The Japanese are well represented and so are the Russians. We also have German, Spanish, Norweigan, Swedish, French and US visitors. There is a very strong US representation now. That hasn’t been the case with the Iraq war and all of that. Their numbers are increasing again,” he noted.
He noticed a number of celebrating Germans in town as well, following their 7-1 World Cup semi-final defeat of Brazil on Tuesday night.

“I haven’t seen any Brazilians although I’m not saying that they’re not there. They mightn’t be in great form although a few Germans we have here are in great form. The Brazilians are probably keeping a low profile,” Mr Hughes laughed.

The final item on the festival programme will be the Sunday mass in Irish at 10am in the parish church. The last traditional music event is the Saturday night concert.