Home » Lifestyle » Gather round to say ‘thanks’ 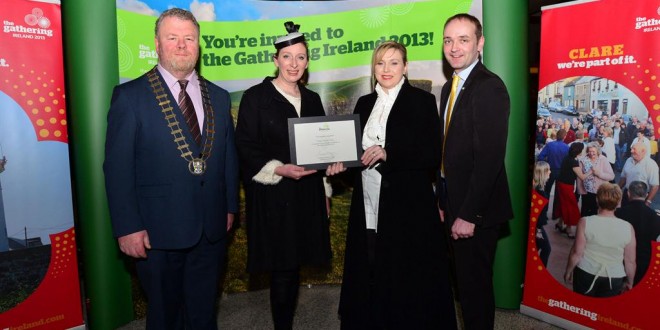 Gather round to say ‘thanks’

THE Gathering  proved to be a winner with communities, larges and small, all over the country. An  event marking the success of the initiatives undertaken in  Clare in 2013 was held at Shannon Airport last night.

Representatives of the 250 festivals and events held around Clare during 2013 were presented with “Thank You” certificates by Mayor of Clare Joe Arkins. He said they had made an important contribution to the positive year experienced by the local tourism industry in 2013.

Mayor Arkins was joined at the event by members of the County Clare Gathering Steering Committee, and representatives of Ireland Reaching Out and event sponsor Cliffs of Moher Visitor Experience.

“Despite the scepticisn expressed in some quarters at national level regarding the potential impact of the Gathering Ireland initiative on tourism, it has become quite clear that the initiative was one of the primary factors behind the excellent performance of the local sector last year,” explained Mayor Arkins.

He continued, “From the outset community groups, event organisers and individuals across Clare embraced the potential of the Gathering as evidenced by the huge turnout at the initial Gathering briefing in 2012 and again at the Gathering launch in Glór in January 2013. I particularly want to congratulate the Steering Group for its work in mobilising communities to invite Diaspora and friends to attend over 250 special Gathering events right across the county. As a result of these efforts, the Gathering helped to bring thousands of people with Clare connections home and at the same time provide a massive boost to the local economy.”

Clare Gathering coordinator, Monica Greene agreed that the Gathering initiative and the variety of festivals and events that took place around the County during 2013 have paid significant dividends for the sector.

“At the beginning of last year it was projected that the Gathering initiative could attract at least 20,000 international visitors to County Clare, injecting up to €10m into the local economy. With a 10% increase in visitors to the iconic Cliffs of Moher and to Loop Head Lighthouse and the recorded overseas visitors to funded events, there is no doubt but that this projection has been met if not exceeded,” Ms. Meehan said.

Previous Less money for Clare’s roads
Next €144,000 worth of cannabis found in Mullagh growhouse