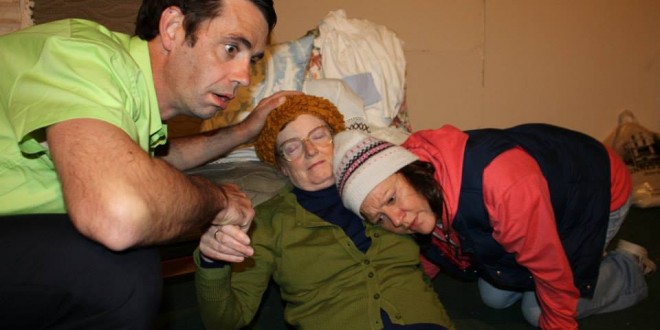 Corofin Drama Society will stage The Two Loves of Gabriel Foley on January 21 and 22, 2014 in Glór, Ennis.

Gabriel Foley back in Glór

COROFIN Drama Society will stage The Two Loves of Gabriel Foley, by Jimmy Keary in Glór, Ennis on Tuesday and Wednesday next.

The play was performed in the county town in early December, but after selling out on both nights, the society decided to stage it again.

“This is a hilarious comedy and it is a play that rarely comes around. We all go to different plays and sometimes they are really a chore to get through, but this one is a real joy to behold”, explained Stephen Bermingham, PRO of the society.

“We staged it in Glór in early December for two nights and we had a fantastic reaction from the crowd. We got a standing ovation each night and they were howling with laughter during the show. I don’t know when I saw a reaction like this, I don’t think I ever have. People were nearly getting sick laughing. We filled Glór both nights. Anyone who I met since and was talking to about it, were dying to go, even people who had already been. We have only two performances planned, so I would urge people to book in advance, to guarantee a seat,” he explained.

Tickets for the shows are available from Glór.

Previous This week’s cartoon
Next €400,000 to reach out to new music generation