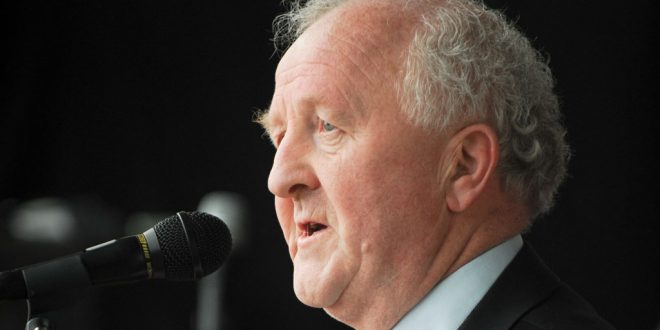 Robert Frost is to stand for President of the GAA.

Frost to stand for GAA presidency

Former county board and Munster Council chairman, Robert Frost is to put his hat in the ring and stand for election for the post of GAA president.

In running for top post in the association, Frost, a native of O’Callaghan’s Mills, is seeking to become the first man from the Banner County to hold that office in 128 years, since Edward Bennet became the second President of the association in 1887.

Frost’s nomination was proposed by PJ McGuane (Coraclare) and seconded by Christy Murray (Sixmilebridge) to contest the presidential election at this week’s board meeting.

In a statement, Clare GAA public relations officer, Sean O’Halloran said Mr Frost brings to the table a wealth of administrative experience, having been chairman of the Munster GAA Council (2013 to 2015) .while he has been a member of Munster Council for the past 12 years.

Frost was also chairman of the Clare hurling board for nine years while he also served two five year terms as chairman of Clare County Board and five years as vice chairman.

Clare GAA chairman Joe Cooney said they are proud and delighted to nominate Robert to run for president of the association to succeed Aogán Ó Fearghaíl who has another year to run in his three year term.

“He has been a life-long servant of the GAA and critically from grass-roots up, starting with his club and going on to become a vastly experienced administrator at county, provincial and national level.
“He is one of the most experienced officials in the organisation at any level today and, critically, retains the passion, drive and enthusiasm for the GAA that he has always had over the years. Uniquely, his experience allows him to marry the needs of the organisation at both national and club level.

“Clare has given many loyal servants to the GAA since Michael Cusack founded the association. Robert has followed closely in that proud tradition and would be a very fine leader of our association. We look forward to giving him every support,” stated the board chairman.