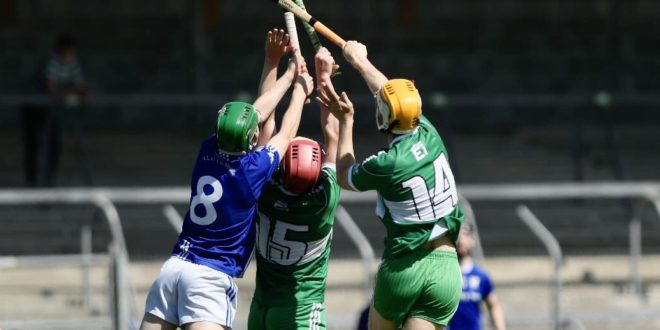 An impressive performance from Kilmaley saw them overcome Wolfe Tones and seal their spot in the quarter-finals of the Clare SHC.

A brace of goals for Daire Keane and Tom O’Rourke were the crucial scores with all bar two of their scores coming from play, while Conor Cleary’s commanding presence in the square also proved a crucial factor.

The opening period mirrored the weather conditions with a blistering first half that produced 21 scores and saw Kilmaley narrowly in front.

The tone was set as early as the 30th second when Tom O’Rourke crashed the ball to the Wolfe Tones net after an incisive pass from the impressive Daire Keane. Mikey O’Neill followed up with a tidy point from distance, but Wolfe Tones found their feet with Rory Hayes, Jack Cunningham and Aron Shanagher leaving just the minimum between the sides.

Daire Keane was proving a constant threat in the inside line and he swept home with a brilliant finish after a long delivery was not dealt with it by the Tones defence. A Rory Hayes point was sandwiched between scores from Cathal Darcy and Sean O’Loughlin to see Kilmaley 2-3 to 0-4 clear.

Aaron Cunningham’s role as the sole inside forward for the Shannon men began to pay dividends midway through the half, and he pounced for a well-taken goal just after the 10th minute. O’Neill and O’Loughlin responded with a point each and at the opening water break, Kilmaley led by 2-5 to 1-4.

The momentum switched on the resumption with Wolfe Tones reeling off four without reply to level proceedings for the only time in the contest. Kilmaley arrested that slump to outscore the Shannon men 0-4 to 0-1 for the remainder of the half to lead 2-9 to 1-9 at half time.

The second half began in a similar fashion to the first as Kilmaley crashed home a brilliant goal from Daire Keane to really put them in the driving seat. Shanagher frees were the main outlet for Wolfe Tones scores as Conor Cleary’s man marking job on Shanagher robbed the Tones of one of their main dangers from play. They kept plugging to cut the gap to four with points from Rory Hayes and Dean Devanney but an outstanding goal from Tom O’Rourke helped to see Kilmaley lead 4-11 to 1-14 at the final water break.

The sides traded scores in the closing quarter, but Wolfe Tones continued to apply pressure with Shanagher offering the chief threat. Cleary picked up a second yellow card late on with the resultant free almost creeping into the Kilmaley net. Bryan O’Loughlin’s goal stood firm and Kilmaley marched on to the last eight draw.

Previous Green light for swimming in Kilkee, Spanish Point and Miltown
Next “They have no outlet at all”