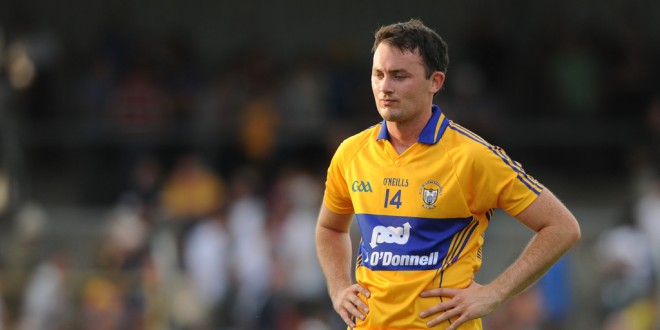 Footballers knocked out of All-Ireland qualifiers

NOT scoring in the closing 25 minutes cost Clare a famous win over Kildare in Ennis on Saturday evening. When David Tubridy pointed a free, won by Rory Donnelly, ten minutes into the second half, Clare led 0-12 to 0-6 and Kildare looked seriously rattled.

[doptg id=”35″]However the visiting Leinster county, upped their game, made some key substitutions and ran at Clare incessantly. Substitutes Eoghan O’Flaherty and Paddy Brophy kicked critical scores to help sculpt a place in the last 12 for the Jason Ryan managed team.

Clare had played exceptionally well at stages during the first half. Points from Enda Coughlan, Podge Collins, Rory Donnelly, Martin McMahon, Shane McGrath (0-2) and a David Tubridy free helped Clare into a 0-7 to 0-4 interval lead.

Alan Smith kicked three first half points for Kildare, while Padraig O’Neill added a point. The Clare supporters in the 7,745 attendance gave their team a standing ovation at half time.

Clare started the second half shakily with Alan Smith pointing for Kildare and Kevin Hartnett clearing off the line. However, inspired by Gary Brennan, they took over for the next eight minutes. Brennan put over a brace while Tubridy pointed two frees and a 45, establishing a 0-12 to 0-6 Clare lead.

However Kildare, on the scoreboard at least, dominated the remaining 25 minutes, adding seven points without reply. It’s not that Clare died away completely, it’s just that Kildare were more clinical in front of goal. In fact Clare created 15 second half scoring chances but kicked just five scores.

Kildare will now meet the beaten Leinster or Ulster finalists in the next round of the qualifies while Clare will reflect on a commendable display but know that they should have closed it out.