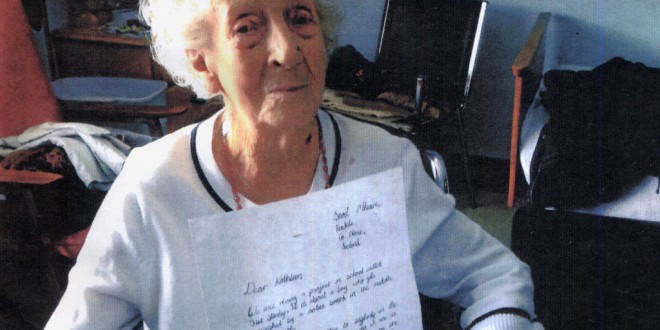 Kathleen Snavley with the letter she received from pupils Róisín Quilligan and Siobhán Tuohy.

FEAKLE woman and Ireland’s oldest person in history, Kathleen Snavely celebrated her 113th birthday in Syracuse, New York State, on Monday but earlier this year she took time out to correspond with pupils at Feakle National School.

Mrs Snavely was chosen by Róisín Quilligan and Siobhán Tuohy as part of their Flat Stanley project in school.

This project is based on the Flat Stanley books, written by Jeff Brown Stanley, which sees the Flat Stanley character travel the world in envelopes. It began in 1994 in Ontario, Canada, when Dale Hubert had the idea of having children create their own Flat Stanley paper cut-outs and mailing them to friends and family around the globe, in order to foster authentic literacy activities for kids and get them excited to write about Stanley’s adventures.

In Feakle, pupils have written to and received responses from a number of famous people, including President Michael D Higgins, Channing Tatum, Ryan Tubridy, Henry Shefflin, Brian Gavin, Johnny Sexton, Lar Corbett and letters from the offices of Prince William and Duchess of Cambridge Kate Middleton.

However, on this occasion, sixth-class pupils, Róisín and Siobhán decided to write to Mrs Snavely.

In their letter to her they said, “We could send a letter to anybody in the world and we picked you because we are so proud that you are from Feakle and you are doing so well. We also wish you the best in the future and hopefully you will keep as well as you are now.”

They were delighted to get a response from Sr Kathleen Obsbelt in the post last St Patrick’s Day, writing on behalf of Mrs Snavely.

In the letter, in which she wished them a happy St Patrick’s Day, she enclosed a photograph of Kathleen Snavely holding their letter.

“Apparently Flat Stanley was there with the letter but he took off for parts unknown. So I am enclosing this snapshot so you know that he was here in Syracuse. Kathleen hopes that you both do well in school. She has always supported the family in seeking higher education and hopes that both of you will someday go to college. Kathleen is doing well and still talking about the wonderful celebration of her 112th birthday. She very much enjoys hearing from Ireland, though writing for her is difficult because of her diminished eyesight,” she wrote.

Siobhán said, “We said she was from the area and she was born here and we thought it was a good idea and it was nice to write to her. We told her about the project and asked her how she was and asked her to send a photograph back with Flat Stanley.”

Róisín said when she got the letter back from her, she couldn’t believe how well Mrs Snavely looks.

“She is 113 and she looks amazing. I was surprised that she did send it back. We were just thankful that she got it. I sent her a birthday card over the weekend,” Róisín said.

Feakle National School principal, Michelle O’Loughlin said the Flat Stanley project was something she had done with her pupils before coming to teach in Feakle and she decided to introduce it. Flat Stanley is a little boy, who gets squashed by a notice board in the middle of the night. He can go anywhere and fits through doors, so pupils got to choose whoever they wanted to write to.

She explained that all classes are involved in the writing process but in addition to that, the older classes wrote their own Flat Stanley adventure stories for the younger classes.

“We thought it was a great project because people you’d never think would reply do reply. It was a letter-writing project, as well as writing a story for the younger classes and the younger classes read the book and wrote letters. We had some premier players reply this year, like Jason Puncheon of Crystal Palace. I think it’s great that the students get to pick the person themselves and to pick someone like Kathleen Snavely was very interesting and different to everyone else,” Ms O’Loughlin said.

Róisín explained why they decided to write about Mrs Snavely.

“I was talking to my aunt one day and it was going around Feakle that she was the oldest woman ever at 111 years and 327 days and she said, ‘wouldn’t it be nice to write about it’. People were doing joint Flat Stanley projects and I asked Siobhán would she do one with me and it went from there. We looked her up and we found a load of information about her.

“She is a very interesting lady and she doesn’t look her age at all. It was really nice to get a reply because no-one wrote to anyone like her. She was around for the 1916 Rising and it is a lovely letter she sent back,” she said.

Siobhán concluded, “We really enjoyed the project and sending the letters to people all over the world”.