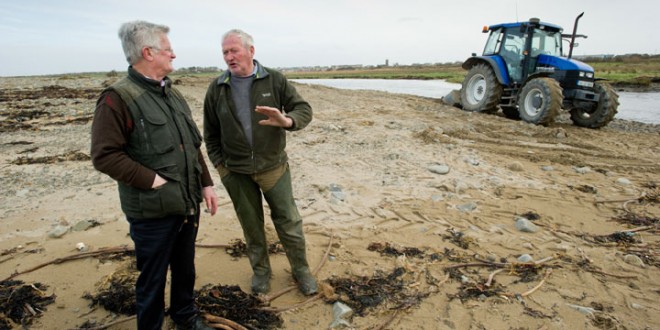 FARMERS affected by coastal flooding in Farrihy , which straddles the border between Kilkee and Doonbeg, have had to hire a private contractor to help save 300 acres of land extensively flooded in the January and February flooding.

“The farmers have taken it on themselves because their land was getting worse and worse. Every time the tide comes in three feet of their land is removed. It is reaching the stage now where it’s going to reach the bog area of the land,” Coastal Erosion Group PRO Tommy Comerford said.

“The flooding has just absolutely destroyed the whole place. What they have done is they have got their own private machine in. They’re doing it out of their own pocket to try and protect the piece of land that’s getting damaged. Doonbeg regards this as a real emergency,” he added.

Mr Comerford has revealed that a land and householder in Farrihy, Gearóid Greene, has had to spend approximately €7,000 to build a protective wall at the back of his house.

In early February sizeable rocks hit the rear wall of his house, which sits in Farrihy Bay.

“I woke at 5.30am. The rocks hit the wall at the back of the house,” Gearóid Greene confirmed.

One hundred acres of his landed was completely flooding earlier this month, 40 acres of which he cut silage on in 2013.

“The problem is the sluice is broken and the water isn’t able to empty out. Every time the tide comes in it fills more,” Tommy Comerford explained when The Clare Champion visited Farrihy in recent weeks.

Also speaking recently, Tomás Flanagan, another landowner on Farrihy Bay, said that much of his land was inaccessible.

“I’ve no access since around Christmas. It got worse in February. That’s when the real damage was done. The bigger issue now is that the bank here is getting eroded. If that goes you’ve no protection whatsoever. It’s an urgent case,” he said at the time.

Willie Hanrahan, who is chairman of the Coastal Erosion Group, said that the long term solution is the provision of a new sluice in the bay, where 1.8 x 1.5km of land was flooded this month.

“There’s farms at both sides. When we used to come here before you could drive in there,” he  explained, pointing to hundreds of acres of flooded land.

“To solve the problem we need a new sluice and we need to rise that clogher, like they’ve done in Rhynagonaught and they’ve done above in Quilty at Seafield,” Mr Hanrahan added.

While the recent work has resulted in some of the flooding receding, Tommy Comerford is concerned that the next high tide will result in further flooding.

“When you get a high tide it will flood again and they’ll have to use the machine to let it out until they get the sluice repaired. It’s a real emergency. The local authority and government have to help these farmers. The local coastal action group is hiring a private engineer to assess the damage and present a case to Clare County Council,” Mr Comerford revealed.