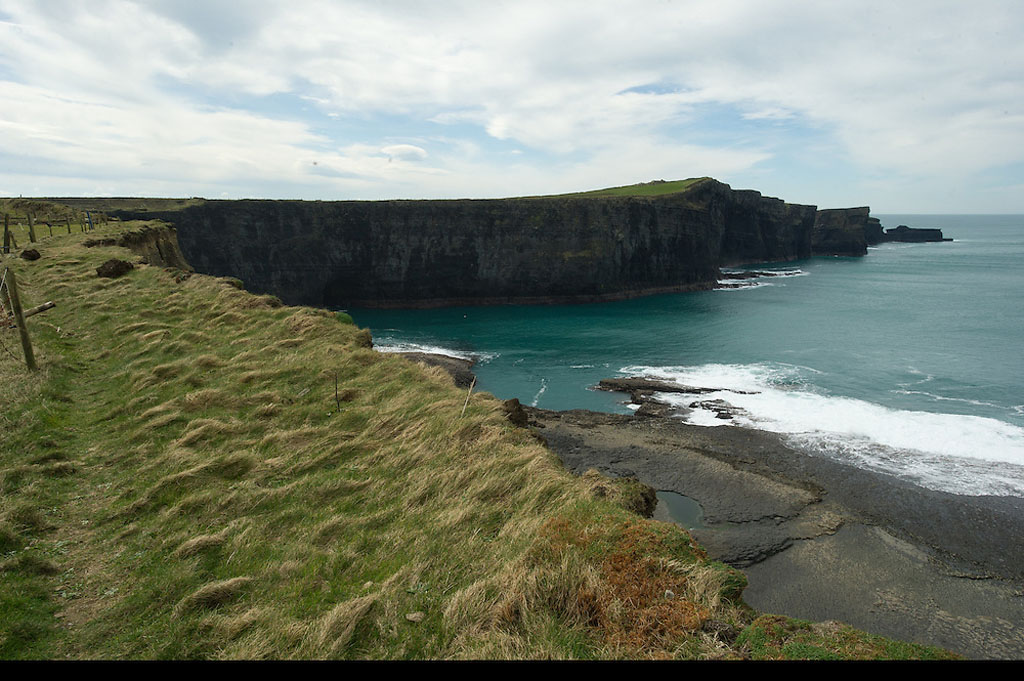 A view of the area where the animal carcasses were found dumped. Photograph by John Kelly

A 65-year old farmer this week pleaded guilty to a charge in connection with the dumping of 12 decomposing animal carcasses from a 300 ft high cliff four years ago in West Clare.

At Ennis Circuit Court today (Tuesday), Martin Gerald Foley pleaded guilty to disposing of waste in a manner that is likely to cause environmental pollution on dates unknown between April 20th 2013 and March 13th 2014 contrary to Section 32 (1) of the Waste Management Act. The 12 carcasses were made up of eight horse carcasses and four cattle carcasses.

At a previous court date, counsel for Mr Foley, Pat Whyms BL said that his client would be contesting the charge and that the trial would take over one week.

Judge Gerald Keys was ready to be impaneled in the case on Tuesday, however, Mr Foley of Lislanihan, Kilkee said ‘guilty judge’ when arraigned on the single charge in court.

The guilty plea followed a lengthy Garda investigation into the discovery of the rotting animal remains at the base of the cliffs at Baltard, Doonbeg in April 2014.
This resulted in Gardai serving a two volume Book of Evidence on Mr Foley in September 2015.

In April 2014, Clare’s ISPCA warden, Frankie Coote carried out the examination of the decomposing carcasses at the base of the Cliffs

The Garda investigation in the case included DNA tests that were carried out on the dead animals to determine who they belonged to and the work of an oceanographer to determine if the carcasses were washed ashore or not.The carcasses had to be cremated at the scene as it was not possible to remove them.

In response to the discovery of the carcasses, four separate agencies launched investigations that included the Gardai, the ISPCA, the Department of Agriculture and Clare County Council.

The bloated animals were located close together at the bottom of the isolated cliffs.
The decomposing remains were brought to the attention of the Gardai by a walker who discovered the carcasses while walking on the rocky shore. The walker reported the discovery to Kilrush gardaí, who attended soon after.

In the case, Mr Foley is represented by his brother, Galway based solicitor, Oliver Foley and Mr Whyms.

In 2016 in court, Mr Whyms made a successful application for legal aid for his client. Mr Whyms said, “Mr Foley doesn’t have any regular income as such. He does have a small holding on which he he keeps a few horses for himself and there are also some cattle that he is minding for a man who owns the cattle.”

Mr Whyms stated, “His only income in the last year came from the sale of a few horses and if you have average that over the week, it comes at €200 a week.”

Mr Whyms also stated, “He is not on social welfare and doesn’t have a job. This waste legislation that is in the case is very technical and there is no way that a lay person could conduct a defence on his own and he doesn’t have any money.”

In court on Tuesday, Mr Whyms said that there would have been a lot of technical evidence in the trial and in response to his application, Judge Keys extended the legal aid cert for Mr Foley to cover the costs of an engineer’s report that had been carried out.