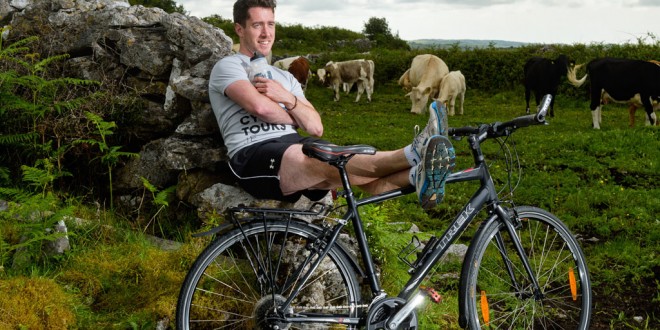 A NORTH Clare man is introducing tourists to the mysteries of the Burren.
Enda McGuane, founder of West Coast Cycle Tours, explained how visits from friends inspired his flagship tour, the Wild Atlantic Day.

“I got a bike about seven or eight years ago on the Bike to Work Scheme and am living in Kilnamona so I’m close to the Burren and the coast, so I came up with this from cycling around on my own and with my friends and seeing what was out there that was good to do. When my friends from outside the county or from college would come up to visit, I’d take them to these places,” he said.

“The one thing about cycling here is that it is not as safe in Ireland as it is on the continent but we have tried to pick the most scenic and safe routes. The Western Greenway and the West Clare Railway are great starts in providing safer routes for cycling,” he continued.

The idea for the company had been ebbing and flowing on the periphery of Enda’s mind for the last five years or so but it wasn’t until he did a Local Enterprise Office Start Your Own Business course in January 2014 that it came fully into focus.

“That course knocked the fear out of me. I was shown how to register the business, how to get tax clearance, all the things you need to know about starting your own company,” he recalled.

Having a full-time job as a national school teacher in Clonlara has also been an advantage.

“Having the holidays help certainly and the teaching itself helps. Any of the parents would tell you that at the first opportunity I’ll take the kids outside. I teach fourth and fifth class and love to take them out and bring them a little bit out of their comfort zone and that is what this is really about, getting people out into the countryside and challenging their comfort zone but not too much.

Enda loves to travel but it has taught him the value of what is available in his home county.

“I did a bike tour in Vietnam in 2012 and there were so many things I saw that were amazing and not that they were the same as what we have here but there are similarities.

“This tour is a close cousin to travelling. It is an opportunity to show people what I like, what my friends like and I just happened to stumble on cycling a few years ago and it built into an interest,” he outlined.

The day-long tours involve cycling, hiking, eating and sightseeing but “because I’m on hand all day, people can sit into the jeep, it is not the Tour de France, it is not a race”.

Even though the day covers a large area, participants cycle only about 10km but this can be increased or decreased, depending on the wishes of the group. The tours are limited to just four people per day and while Enda doesn’t like to tell them exactly where they will be going, he does say he likes to support other small businesses in the Burren.

“On a bus, you are just capsuled along. This is a different experience. I give the groups a go pro and they attach it to their helmets and some of the footage they have taken is amazing. They might just stop along the way and admire a view or look at some berries growing at the side of the road. We have an inviting landscape. It is always different,” Enda outlined.

While the landscape may be inviting, the weather rarely is.

“Weather definitely puts people off but we are in Ireland. We provide rain coats but you get to choose how much time you spend on the bikes and there are lots of places to visit on the way. It is the Wild Atlantic Way; people aren’t looking for the Peaceful Atlantic Way,” he said.

Even though he has only been able to take online bookings since August, Enda has had bookings from the United States, Germany, France and the UK as well, as people from Clare and across Ireland.

“I love Clare. It is easy when you are in college to be self-deprecating about where you live but you go home and realise you live in one of the best counties in the country,” he added.

“Everyone says ‘I never knew Clare had as much as it does’. The day often turns into a counselling session. There is plenty of chatting and it is a great day. One guy described it as the “most fulfilling day he ever had” and that is some compliment,” he concluded.