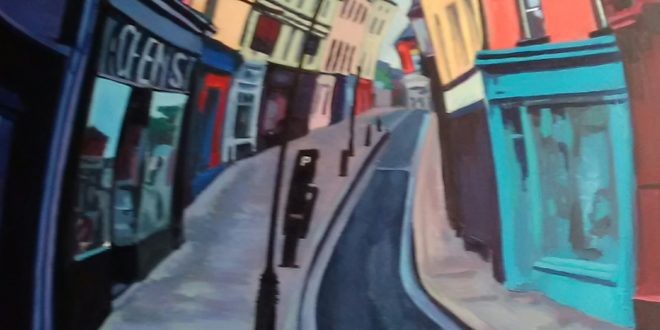 FROM witnessing first hand the devastating forest fires of Australia to experiencing Ennis’ – and the rest of the country’s – Covid-19 lock-down, local artist David O’Rourke has had an eventful year.
Some of the experiences of this year has been documented in David’s latest artistic body of work which will be launched in an exhibition titled ‘Lock-down 2020’ later this month. Due to Covid-19 instead of a gallery setting the Ennis artist’s paintings will be showcased in various venues throughout the town. Eight paintings created this year combining images from Australia and Ireland including the lock-down in Ennis, will be shown in various shops to allow for social distancing. The exhibition, supported by Clare County Council, will also be displayed online, with a companion video piece to be release as part of Culture Night.
David tells us that the “only positive thing about Covid is the fact it has afforded me time to dedicate to my work.”
He said he is delighted to be able to show his work to the public with the support of the shop owners and the local authority. “I didn’t think it would be feasible to have an exhibition a few months ago, but being able to put it in the shop fronts means it can adhere to the social distancing guidelines. And it might mean more people will get to see it as well.”.
He explains that the exhibition features works created in 2020, a year which he describes as one which “which hasn’t been fun really”.
Images of Ennis’ empty streets, a stark reminder of the effects of lock-down, are just some of those featured in the exhibition. “It was very different to the Ennis we’re used to with the streets empty. During lock-down it kind of felt like the walls were closing in and it was very depressing. To see the empty streets was quite eerie. Hopefully that will pass.”
David does a lot of work with local schools, which of course ground to a halt when lock-down began. “I remember when it all started back in March I lost about eight jobs in one week and I can’t see schools coming back the way they were. The first month of lock-down was pretty hard I didn’t know what the hell was going on.”
Even though schools are now open he says, “I wouldn’t be inclined to go into a school now and I don’t envy the teachers at the moment, it must be highly stressful for them.”
Other paintings featured in the exhibition include natural scenes from Australia, which late last year experienced record-breaking temperatures and months of severe drought fuelling a series of massive bush-fires.
David was staying very close to the fires while visiting family south of Sydney over Christmas. “There were black skies and ash falling from the skies, The fires at one point were about 18km away, it can spread pretty fast, it was pretty terrifying. The whole area was evacuated. I met people who had lost everything, they had lost their farms and were just expecting to go back and have it all gone. It was pretty heavy.
“I think the road was blocked between where we were and Sydney at one point. The air quality was so bad, there were clouds of smoke everywhere. But thankfully we were all ok. I was there for about two and a half months, I go most years, but with Covid you can’t even go there and there are a lot of Australians who are stranded and can’t get home which is actually scary.”
The paintings as part of lock-down 2020 will be shown in various shops throughout Ennis. The exhibition will form part of Culture Night on September 18 while there will also be an online show on orourkesfineart Facebook. The companion video piece which will be launched on Culture Night can be viewed on YouTubeand Facebook.