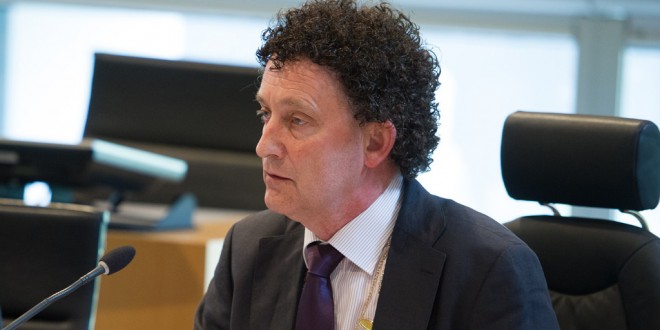 Councillor Johnny Flynn, one of the project team working on the school development at Knockanean

Ennis flood protection in danger without works to historic structure

THE collapse of an historic famine era feat of engineering could “undermine” the flood protection of Ennis the county capital’s mayor has warned.
Councillor Johnny Flynn has called for funds to be provided for the repair of the Ballyhee Cut, just north of Ballyalla Lake. Speaking at a meeting of the Ennis Municipal District he outlined, “This historic piece of cut stone civil engineering works is in a poor condition and at serious risk of further deterioration.”
He sought backing from his fellow councillors to allow for any funding unspent from the General Municipal Allocation to be provided for repairs to the Ballyhee Cut.
He commented, “This very important piece of civil engineering is being undermined.” Leonore O’Neill, senior executive office for the Ennis Municipal District agreed that the Ballyhee Cut is a “very important heritage item”. She stated that the structure has been affected by the growth of sycamore and that the repair of defects would require a large amount of funding.
It was agreed that the allocation of funding to clear the area for proper assessment by engineers would be on the agenda at a meeting set aside for GMA discussions.
Councillor Ann Norton voiced her support for the motion saying, “something needs to be looked at there. It is such a shame. If the damage get any worse we might not have another opportunity to repair it.
Councillor Flynn welcomed the response from the council executive. “This is a very important structure for flood relief and if it were to collapse it would undermine the flood scheme. Significant money is needed and we should carry out a feasibility study for the work and then apply for government funding.”
The Ballyhea Cutting is beside Templemaley Graveyard at the bridge spanning the river, dating back to the famine era the works were carried out by hand.
The Ballyhee Cut was a public works scheme that began in 1848 and was completed in 1857. It was an enormous feat of engineering, and one of the biggest public works schemes undertaken in Ireland at the time.
Apart from providing much-needed employment for the local area, the purpose of the work was to reduce flooding of valuable meadowlands.
It was built to lower the level of the Cloonteen Lake and prevent flooding over a wide area of low lying land, draining into Ballyalla Lake and onwards into the River Fergus.
This was achieved by cutting a channel from Cloonteen Lake to Ballyalla Lake to reduce the output of water from Cloonteen along another course. This entailed cutting through half a mile of limestone hill to a depth of 46ft.
The works provided valuable employment to people from the Cloughleigh area of Ennis town, from Barefield, Inagh and Ruan. The works were part of a series along the River Fergus stretching from Corofin to Clarecastle and the overseer of the works was a civil engineer, John William Kelly, who was based in Jail Street, Ennis.
In his yearly reports, he makes many references to the condition of the workers, noting their weakness and inability to perform what would be a normal day’s work. The works were suspended from 1851 to 1854, due to disputes between the government and the landowners.
However, it was completed in 1857 and is visible today as a deep channel of water flowing between several feet of exposed bedrock surmounted by carefully constructed and sloped retaining walls that remain as a testament to all those who worked on it.

FRUSTRATION has been expressed over vandalism at an ancient site in Tulla, linked to a …