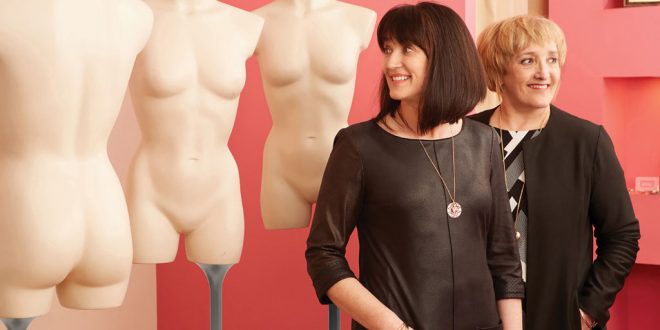 Gwen and Maeve Culligan in the County Boutique. Photograph by Mike Mulcaire

A PICTURE-perfect look at style through the ages in Clare will form part of the 50th anniversary celebrations of one of Ennis’ best known boutiques.

The County Boutique will mark their golden jubilee with a very special exhibition, as part of their Eras of Style celebration later this year. They are hoping that some of their loyal customers who have shopped at the O’Connell Street store over the years will help make it a ‘run-way’ success.

The October exhibition will see outfits from different decades, as far back as the 1950s, put on display, along with photographs of the very same ensemble being worn back in the day.

Already, the County Boutique have been contacted by a number of customers wishing to include their beloved fashion finds in the exhibition. As an added incentive, there will be a prize for the best outfit from each decade.

Gwen Culligan explained, “We wanted to do something to celebrate our 50 years here in business and we were talking about doing some kind of photographic exhibition.

“Then somebody suggested why not an exhibition with the photos and the outfit itself and that sparked the idea for Eras of Style. We are asking customers to bring in outfits and photographs from the past for the exhibition. The pieces and the photographs that will be included in the exhibition will all be looked after and returned.”

The exhibition will take place during the weekend of October 14, just one of a host of events planned to mark the milestone anniversary.

She continued, “We’ve had a few emails and calls from people wanting to include their outfits for the exhibition. We had one call from a girl whose mother bought an outfit to celebrate her 35th wedding anniversary.

“That young girl has remodelled the outfit and she wears it herself now and she is going to bring that in to us. That’s what we are hoping for, that people would have held onto the nice things they got and they have now become vintage or heirloom pieces.”

According to Gwen, each outfit will have its own story to tell and not just about the time it was purchased in.

“The exhibition will certainly highlight the different trends over the decades. Things will look very different from the ’60s to the ’70s and the ’80s. The County Boutique would have moved with the times but always a classic style with a twist and always good quality.

“We would expect that many of the outfits will have a story behind them. We often have somebody coming in saying ‘I bought my going away outfit here for my wedding and now my daughter is getting married’, so they are looking for their mother of the bride outfit for her wedding. There are so many special occasions in people’s lives where they have purchased the outfit from us.”

Gwen added that even if somebody does not have an outfit to include in the exhibition, photographs on their own will also be gratefully accepted.

“We are going to put them in album and use it as an archive,” she said.

The County Boutique was first opened in 1966 by Gwen’s parents, Frank and Merty Culligan. Recalling her mother, Gwen said, “She had always worked in retail, in Arnott’s and Aer Rianta. Actually, Brendan O’Regan hand-picked her for the job there. She used to sell perfume to all the movie stars; she served Elizabeth Taylor and Richard Burton in her day. When she got married and after she had her last child Maeve, she decided that she would set up shop.

“At the time, we didn’t have any chain stores or any of the English multiples and there wasn’t anyone really importing; a lot of clothes were being made here in Ireland. So it was the start of importing from the UK and France things a little different from what usually was available.

“She used to travel a lot. Very few people did at that stage; they would usually buy in the wholesale places but she would travel to the salon shows in London and Paris.”

Gwen has been with the business since 1990, while Maeve joined in 2002. Over the years, the store has seen many changes, including an extension in 1995, which saw it triple in size.

When asked what she believes is the secret to the family business’ longevity, she revealed, “We’ve thought about that a lot recently and I suppose it’s keeping the customer at the heart of everything.

“That’s where this Eras of Style even came from, thinking how could we involve the customer in what we are doing; customers who we see regularly, and those we may not have seen for a long time, their children and their grandchildren.”

Other events planned to mark the anniversary include an in-store birthday party on October 14 and an afternoon of fashion in the Old Ground Hotel on October 16.