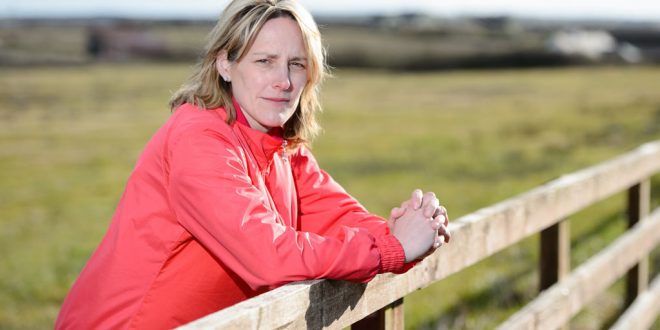 Diane Banville should be celebrating her third wedding anniversary on Tuesday with her husband, Kevin. But just 11 months after their big day, Kevin was killed in a farm accident.

Formerly Kelly, Diane lives with her two young sons in Wexford but is well known in her home county, having played football for Miltown Malbay and Clare.

Diane met Kevin Banville in a pub in Wexford on the May Bank Holiday weekend in 2007 when she was visiting a friend who lived there. By October, she had foregone the offer of a job in Barbados and moved to the sunny south-east. On April 19, 2013 she married the love of her life.

St Patrick’s Day of 2014 started off like any other and the pair and their two young sons, two-year-old Ryan and five-week-old Cillian, were going to go to the local parade.

“I remember walking up the lane about a week or two beforehand and just going, ‘I really love my life’. That image sticks with me, walking up the lane just going, ‘I wouldn’t change a thing’. Cillian was born on Kevin’s birthday, which was February 11, just five weeks earlier. I was slagging Kevin that he would never be able to match that birthday present but he wasn’t there for my birthday after that then,” she recalled.

“After Cillian was born, Kevin used to take Ryan when he woke up and they would go and get the breakfast and he would watch Fireman Sam with him. Kevin would come down to me and give me tea and toast. That day, when he was going down to the farm, he said he would be a few hours because he had stuff to get done. We were trying to get into the parade for 2 o’clock,” she said.

“That would be the normal routine but he said he had a lot to do that day so he would be a bit longer. He wanted to have everything done before going into the parade,” she added.

“I thought he was just a bit delayed and then when 3 o’clock came, I got a bit worried. Cillian woke up and I had the two boys ready to go into the parade. The farm was just a couple of hundred yards down the road but the day that was in it, there wasn’t anyone around because everyone was in at the parade, so when I couldn’t get him on the phone I put the boys in the car and drove down,” she explained.

Diane got out of the car and met a sight she hoped she never would.

“He was trapped. He had passed at that stage but I couldn’t drive a tractor, so I was trying to get hold of someone who could to move back the tractor but anyone I rang was at the parade. I rang 999 but I couldn’t say that he was dead. I couldn’t accept it myself, so I just said he was gone,” she recalled.

The mother-of-two remembers the gardaí and the ambulance arriving.

“Ryan saw as much as I did so, unfortunately, that has stuck with him,” she said.

“My main concern up to that was about getting a photo of the four of us together and suddenly it was what coffin did I want and what hymns. The neighbours were fantastic and they took over with teas and coffees and we had the wake at home. Coming into the house was like the M50, it was jam-packed and the neighbours were fantastic. Even my brothers commented on that. They couldn’t get over it either,” she remembered.

“For me, there has been an emotional and financial impact but the biggest thing is what the boys have lost. Cillian is two now, he is at the age Ryan was. There is a picture of Kevin up and everyday I’d say to him to say ‘hello to dada’ and he would say ‘that’s my dada’. That, to me, is the hardest bit. That is what cuts me up the most because he was a fantastic dad. He would have been great with Cillian. He absolutely loved him and he played with him and the last thing Kevin did the day before was put up a trampoline for Ryan. I have a picture of himself and Ryan in the high vis that said ‘Daddy’s Little Helper’ on it on the trampoline. Whatever about my loss, the loss to the two boys is enormous,” Diane said.

Meeting others who have experienced similar tragedies through Embrace Farm, which is in the process of setting up a branch in the Mid West, has been a lifeline for Diane.

“It is great because it is a network to meet people who have gone through what I have gone through. In the area where I’m from, in a 10 mile radius, there were three deaths. Kevin was involved in a Teagasc group and there were nine of them in it and in 2014, three of them died.

“Through Embrace, I met a lady from about five miles down the road and her husband got killed a number of years ago. She has gone through all the stages. She told me the second year is the hardest and I have found that. I didn’t want to go to the mass. But for me, I’m very lucky. I threw the two boys into the car and went up to Clare for the weekend before it to get a break.

“For the first year you are numb but the second year the realisation kicks in and I found it very, very hard but with Embrace, there is support where you can meet people who have gone through things like that. They also have people who have had serious accidents who can meet others who have had accident,” she said.

“The thing about farm tragedies is it is not just one age. There are kids, there are older people and there are younger people. It is that group and the support that you can say this is how I was feeling and someone else will say, yeah, that is exactly how I felt, you can pick up the phone at any stage and talk to them. They are very good,” she concluded.

Previous From the Burren to Belarus, 30 years after Chernobyl disaster
Next Magnificent Clare show the cats their claws