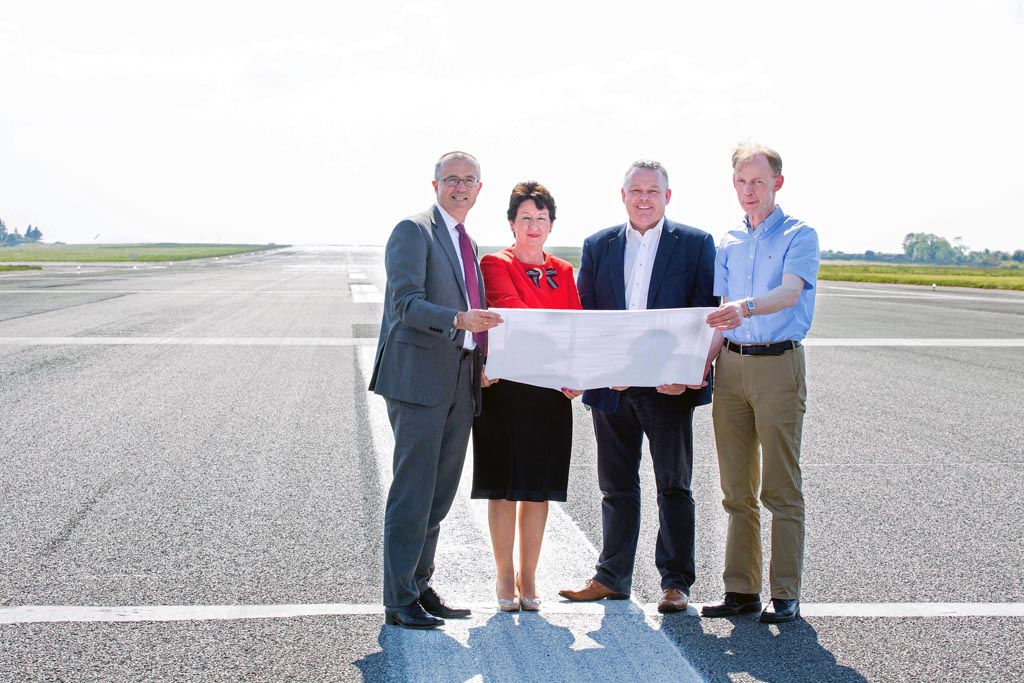 Shannon Airport completed a €15 million project to upgrade the airport’s runway, the longest runway in Ireland at 3,199 metres (almost two miles). Dublin based specialist in this area, Lagan Asphalt Group, with offices in Tulla in County Clare, has been appointed by the airport to undertake the project. The appointment follows their successful bid under an EU tender process. Work on the project includes the rehabilitation of the runway surface, the replacement of runway edge and centre line lighting with energy efficient LED lighting, ducting and other associated works. These works are scheduled to ensure that Ireland’s longest runway continues to meet the strict regulations governing the operation and specification of runways at major airports. Pictured on the main runway at Shannon Airport are L-R Niall Maloney, Shannon Airport Operations Director, Rose Hynes, Shannon Group Chairman, Brian Mcmanus, Project Director Lagan Group and John O’Leary, Engineering and Capital Projects Manager Lagan Group.Pic Arthur Ellis.

Shannon Airport and Lagan Asphalt Group have announced the completion of a €15 million resurfacing project on Ireland’s longest runway, eight weeks ahead of schedule.
Work commenced in May, including the full rehabilitation of 2,400 metres of runway surface, the replacement of runway edge and centre line lighting with energy efficient LED lighting, ducing and other associated works.
A team of 90 people and 70 vehicles worked on the runway at night to avoid disrupting flights.
The project is part of a €15m investment programme and was financed through a loan secured from the Ireland Strategic Investment Fund.
Matthew Thomas, CEO of Shannon Group said, “The runway is the main artery of Shannon Airport and has been one of the most important pieces of infrastructure in the region since its construction in 1961. It provides a crucial link to the global community and has facilitated the growth of Irish tourism and business in the region for over 55 years.”
He added, “While working on such a vital project, it is really important to work with a partner you trust with a proven track record of meeting challenging briefs on time and within budget. I am pleased to say that Lagan Asphalt have done exemplary work here in delivering this hugely important project that will serve the customers of Shannon Airport for the next 25 years.”
Commenting on the project at Shannon, Kevin Lagan, chief executive and chairman of The Lagan Group said, “As one of the leading building materials and contracting companies in the market, runway rehabilitations are an important part of our business. We are very pleased to have delivered this complex and challenging project under budget and a full eight weeks ahead of schedule.
“The Lagan Group has worked on a number of largescale projects at various airports in recent years and we have been able to bring the value of our experience to bear on this project. I would personally like to congratulate our crew on a job well done in delivering this crucial piece of infrastructure for the people of the region,” he concluded.