Home » Sports » Down to homework from drawn hurling final 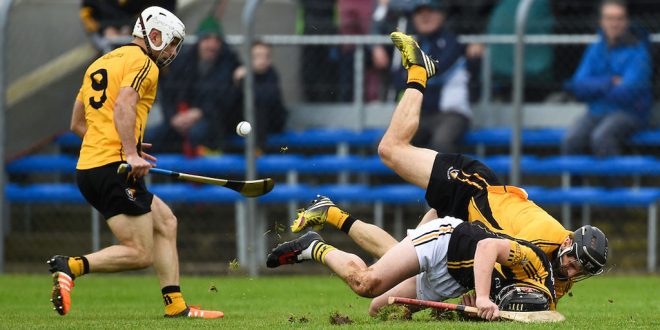 A dramatic moment in the drawn hurling final between Clonlara and Ballyea. Photograph by John Kelly

I don’t know if Ballyea or Clonlara mentors attended the senior football final replay at Cusack Park last Sunday but if they did, they are sure to have noticed that Kilmurry-Ibrickane learned more from the drawn game and that the changes they made to their line-up were key to their victory.

The hurling management teams know both sides have room for improvement. What changes, if any, they will make could well be the key to unlocking the opposition this time around.

Ballyea will have at least one change in personnel now that full-forward Eoghan Donnellan has been ruled out due to injury. At least one change to their forward line-up was expected anyhow, after Martin O’Leary’s impressive showing in the second half of the drawn game, following his introduction at half-time.

If Ballyea are to win, there will have to be a big improvement from their forward line, which managed just one point between the starting six in the drawn game. It will be a surprise if O’Leary isn’t in from the start but a lack of match practice may be a concern for the backroom team, as the Kilmihil man has seen little game time in either hurling or football all season, due to a serious shoulder injury.

Damien Burke is another who could well make his way into the starting line-up.

Pressing hard for a starting place in the Clonlara line-up is Pat O’Hare, who was very impressive, particularly in the second half, in his side’s Clare Champion Cup win over Clarecastle on Saturday last in Sixmilebridge. Another who is pressing for a starting place this week is defender Shane O’Brien.

Whether or not Ian Galvin will make an appearance remains to be seen. The talented 20-year-old has missed out on all league and championship action this season due to a cruciate knee injury but he has been back in training in recent weeks. Together with his cousin Kieran Galvin and Ciaran Downey, the three have been unavailable due to injury.

For the drawn final, Clonlara moved Oisin O’Brien from defence to midfield, where he was given the task of marking Tony Kelly. This resulted in Domhnall O’Donovan been handed the job of playing at full-back. It will be interesting to see if this is the option followed again this week.

Clonlara’s inter-county contingent hold the key to the outcome of this game. That they didn’t play to their full potential in the drawn game is unquestioned and if Nicky O’Connell, Darach Honan, Colm Galvin and John Conlon manage to make a bigger impression this week, then the South Clare side must have an excellent chance of bridging an eight-year gap to their last win.

Ballyea will also know that they must improve, particularly in attack, if they are to win their first senior championship. Niall Deasy and Gary Brennan were tightly marked in the drawn game and the Ballyea backroom team will have looked at how they might get this duo in particular into positions where they can cause problems for Clonlara. It is likely that one will be switched to the full-forward line for Sunday.
It remains to be see if Cathal Doohan, the only member of the starting forward line to get on the scoresheet in the drawn tie, will be handed an attacking or defensive role. In the drawn game he switched to defence for the second half. He greatly impressed in that position, a role many argue he is best suited to.

The Ballyea defence has impressed all season with Gearóid O’Connell, Jack Browne and Paul Flanagan leading the way. Two of Clonlara’s bright young stars, the O’Loughlin brothers Micheál and Padraic, struggled to make an impression in the drawn tie. In last weekend’s Clare Champion Cup game, Micheál contributed 0-13, ten of which came from play and most of which were scored when he filled a midfield role.

A concern for Clonlara all season has been the manner in which they have lost leads in the final quarter of games. Two weeks ago they were five points clear 10 minutes into the second half and finished up having to come from behind to force extra time.

Tony Kelly remains a key figure in the Ballyea line-up and Clonlara will have to limit his contribution of they are to come out on top. It will be the same on the other side, as Ballyea seek to put the shackles on Cathal ‘Tots’ O’Connell.

All the ingredients are there for another intriguing contest, the outcome of which is likely to be in doubt to the end.

If the experienced players like O’Connell, Galvin, Honan and team captain Conlon can exert a bigger influence this week, it should swing the tie in Clonlara’s favour.